Today, the IFPI released the Digital Music Report 2015, which provides an extensive overview of the global digital music sector, including international market figures, market trends, and worldwide bestsellers information. The report notes that globally, digital music revenues matched physical format sales for the first time in 2014. Digital revenues rose 6.9% to US $6.9 Billion, representing 46% of all global music sales and underlying the industry’s transition over recent years. Overall global revenues fell slightly (0.4%) in 2014, to US $14.97 Billion. 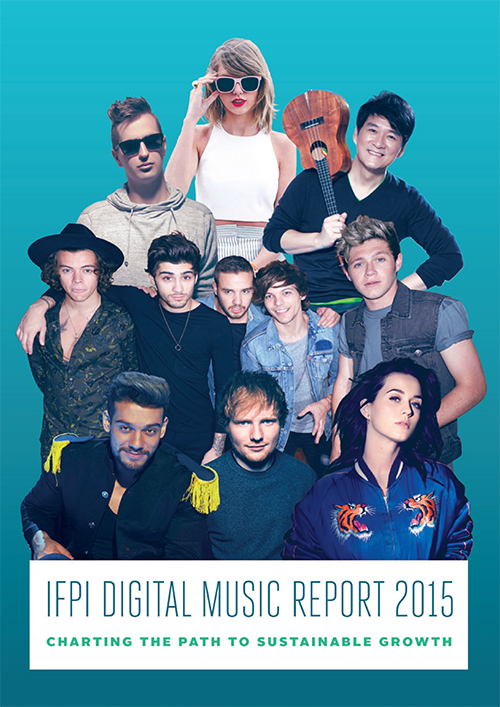 The IFPI says the Digital Music Report shows an industry in continued transition, with consumers embracing music streaming and subscription models. Subscription revenues rose sharply in 2014, growing by 39%, which offset an 8% decline in digital download sales to grow overall digital revenues to US$6.85 billion. The number of paying users of subscription services increased by 46.4%, to an estimated 41 million people worldwide. Subscription services are now a major part of the industry’s portfolio of businesses, making up 23% of the digital market and generating US$1.6 Billion in trade revenues.

“The recorded music business has always led the way for creative industries in the digital world,” said Frances Moore, chief executive of IFPI. “That leadership continues today as the music industry’s digital revolution continues through new phases, driven by the consumer’s desire for access to, rather than ownership of, music. It is a reflection of how much we have adapted that digital revenues today are, for the first time, on a par with physical. The headline statistics of 2014 speak for themselves, with overall revenues still largely flat, down by 0.4 per cent. Music companies are charting a path to sustainable year-on-year growth. That path was never going to be straight, but we are making great strides along it, embracing new models, licensing, investing and improving consumer choice.”

Key trends highlighted in the report includes the increased consumer engagement with licensed digital services, based on a new research study undertaken by Ipsos across 13 of the world’s leading music markets, including Canada. The Ipsos research found that the rise of streaming is driven in large part by young consumers, and that there is substantial untapped potential for growth in paid subscriptions.

The report also notes that bundling partnerships between telecom and digital music companies are becoming standard in markets across the globe, and are playing a significant role in the growth in emerging markets. The report notes that services are also increasingly tailoring their payment models to reach various segments of the market, citing MTV Trax, which offers users in the UK access to 100 songs for £1 per week, ranging to Deezer Elite, which specializes in high quality audio for $20 per month.

The report also addresses the “value gap” in the digital music market, noting the market distortion caused by the way some digital services circumvent normal music licensing rules. The IFPI illustrates this by comparing the share of revenue rightsholders derive from services like Spotify and Deezer to those derived from platforms like YouTube and Dailymotion. The report estimates that music subscription services have 41 million paying subscribers and more than 100 million “freemium” users globally, which generated US$1.6 Billion in rightsholder revenues in 2014. By comparison, YouTube alone has more than one billion monthly users and is considered one of the most popular access routes to music, and yet generated just US$641 million for rightsholders in the same time period.

“The value gap is a fundamental flaw in our industry’s landscape which sees digital platforms such as Dailymotion and YouTube taking advantage of exemptions from copyright laws that simply should not apply to them,” said the IFPI’s Frances Moore. “Laws that were designed to exempt passive hosting companies from liability in the early days of the internet – so-called ‘safe harbours’ – should never be allowed to exempt active digital music services from having to fairly negotiate licences with rights holders. There should be clarification of the application of ‘safe harbours’ to make it explicit that services that distribute and monetise music should not benefit from them.”

The Digital Music Report also covers plans for Global Release Day, which is the industry’s decision to synchronize the release schedule for all markets, allowing consumers to access new music on the same day worldwide. Beginning July 10, 2015, Friday will become the new release day, reducing the risk of piracy by shortening the release gap between markets, and providing new marketing opportunities for record labels over the weekend.

The report also examines music’s impact in the wider economy, with data illustrating the effect of record companies’ investment in artists. The recording industry invested US$4.3 billion in 2013, which, at more than 15% of industry revenues, is a larger share than other sectors like leisure (6.3%) and automobiles (4.2%). This investment is a catalyst for economic activity, said Max Lousada, chairman and CEO of Warner Music UK. “As an industry we make financial investments in our arts that have a ripple effect on the wider economy, whether that is driving new and innovative businesses or creating work for all the specialists that work to develop and sustain artists’ careers from producers, graphic designers and stylists to lawyers and accountants.”

The report looks at the role of music in driving tourism, citing the experience from Austin, Texas, and research from Toronto and the United Kingdom. Music is also a major driver of activity on social media, as the report notes that seven of the ten most-followed people on Twitter are musicians, and nine of the top ten most-watched YouTube videos are music related.

The report also profiles industry efforts to counter piracy, which continues to be a massive problem for the music industry. Research by Ipsos shows that most consumers recognize digital piracy is harmful and should be addressed by governments and intermediaries. 52% of respondents in Ipsos’ survey agreed that downloading or streaming without the copyright owner’s permission was theft. 53% of respondents agreed that licensed services should appear above pirate sites in search engine results, and 52% agreed that companies should not advertise on pirate sites. The report identifies major brands found to be continuing to advertise on egregious pirate sites, which drives revenue for the pirate site and advertisers, but while those who create the music involved receive nothing.

In the global charts, the soundtrack to the motion picture Frozen was the top-selling album internationally, while Pharrell Williams’ Happy was the top-selling digital single. Taylor Swift received the IFPI’s Global Recording Artist Award in 2014, as the most popular artist across formats ranging from CD sales to YouTube views.