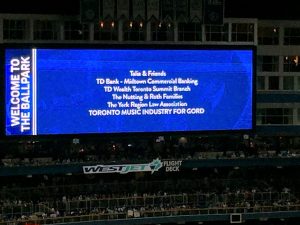 On Thursday night, members of Toronto’s music industry came together for a fundraiser in support of the Gord Downie Fund for Brain Cancer Research. The group attended a Toronto Blue Jays game and gathered beforehand at Steam Whistle Brewery for a pre-game social.

Through beer, snack, and ticket sales, as well as a silent auction, attendees raised $2,100 for the Sunnybrook charity, surpassing the $1,000 goal leading up to the event.

More than 170 tickets were sold to the Blue Jays game, which included a donation to the Downie Fund with purchase. The event was organized by Jon Box of Universal Music Canada, who hopes the event can continue again next year and surpass 200 ticket sales.