Quantifying the Economic Impact of the Canadian Recording Industry

Major and independent music companies in Canada have a substantial economic impact, particularly in Ontario where a vast majority of activity takes place.  That is the finding of a report prepared by PricewaterhouseCoopers LLP (PwC) for Music Canada and released today at the Annual General Meeting.

The report estimates the economic impact of the recording industry – defined as the major and independent record companies – at approximately 400 million dollars in 2010 in Canada.  A full 81% of that activity took place in Ontario, providing a strong differentiator for Ontario from other provinces in Canada.  Most of that Ontario activity occurred in the GTA. 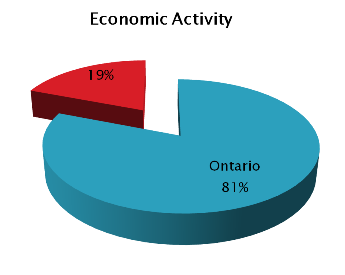 Contributions to the Gross Domestic Product have been estimated in the report as $240 million nationally in 2010 and $190 million in Ontario.

The full report can be downloaded here.

Economic Impact Analysis of the Sound Recording Industry in Canada also tells a compelling employment story.  Thousands of jobs have been created across Canada at wages that are substantially higher than the national average.  The average wage or salary for those directly employed in the recording industry in Canada has been estimated at $58,400, while in Ontario that number rises to $60,100.  Comparatively, the average wage for all industries across Canada is $42,700 or $44,100 in Ontario.

In a release on the report, Michael Chan, Ontario’s Minister of Tourism, Culture and Sport, spoke about the importance of the music cluster to the Ontario economy,

“This is music to my ears,” said Michael Chan, Minister of Tourism, Culture and Sport. “Ontario is home to gifted professionals – from musicians, to producers to record labels that promote our province’s unique culture while generating highly skilled jobs that strengthen our economy. The McGuinty Government is proud to partner with our music sector, solidifying Ontario’s reputation as a competitive creative market and a national industry leader.”

These numbers are just a segment of the entire music industry.  The broader music industry would also include artists and musicians, live performance and the tourism spinoff benefits of concerts, retailers (both selling CDs or digital products), those using music in film or television, manufacturers and retailers of musical instruments and merchandisers.  Furthermore, this report doesn’t even begin to chart the cultural benefits of music.

The study certainly tells an important story about the key role the music industry plays in the economy, whether examined on a national, provincial or municipal basis.  Given the right conditions, the music cluster could grow even further and Music Canada enjoys engaging its partners in delivering that very important message to governments at all levels.