Striking A New A-Chord: Recommendations for the Growth and Development of Canada’s East Coast Music Industry 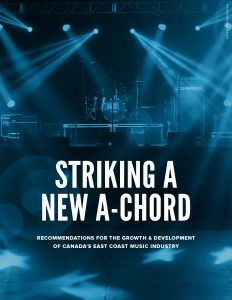 A new report unveiled during the 2017 East Coast Music Awards: Festival and Conference, on April 29, 2017, called for the need to develop an Atlantic Canadian Music Strategy in an effort to strengthen the future of the region’s music sector.

Striking A New A-Chord, a report spearheaded by the East Coast Music Association (ECMA), Music Canada, and Music Canada Live, emphasizes that concentrated investment in the music industry is beneficial not only for those who work in the sector, but ultimately for the region as a whole.

Delivered during a presentation at the Saint John Trade & Convention Centre titled Stronger Together, the report also marked a landmark partnership between all five music industry associations – Musique/Music NB, Music Nova Scotia, Music NL, Music PEI, and the Cape Breton Music Industry Cooperative – who have committed to working with the ECMA, Music Canada, and Music Canada Live to establish this regional strategy.

The report, which was officially commissioned at the 2016 ECMAs in Sydney, NS, underscored a number of challenges facing musicians and industry professionals in Atlantic Canada including stringent liquor laws, changing business models in the industry, restrictions on live venues, and lack of industry infrastructure. The latter is a key focus for the proposed strategy, calling the shortage of music publishing companies, agents, publicists, bookers, and artist managers in the region “alarming.”

Among other recommendations, Striking A New A-Chord also calls for the development of an Atlantic Canadian Music Fund that would seek to provide resources to complement existing programs, attract investment, and develop and incentivize musicians and music related businesses to reinvest in Atlantic Canada.

“Music is fundamentally linked to Atlantic Canadian culture. This report clearly shows that – in addition to bolstering that identity – supporting this sector means helping small businesses, creating opportunities to attract and retain youth employment, and developing our artists to compete at an international level. The first step to harnessing these opportunities is creating a pan-Atlantic strategy.” – Andy McLean, Executive Director of the ECMA

“Atlantic Canada has one of the richest, most important – but fragile – music scenes in the country. Creating and executing a region-wide strategy will ensure the true economic, social and cultural potential of the industry, and its countless benefits for cities and towns, can be realized. This is an historic moment in the timeline of East Coast music, and huge milestone for all of the associations involved. Congratulations, Music Canada Live looks forward to supporting the hard work ahead.” – Erin Benjamin, Executive Director of Music Canada Live

“Targeted investments in other parts of Canada have strengthened those music communities and stimulated additional private spending as well, leading to increased activity in the sector . We look forward to working with government and industry stakeholders to find ways to complement the existing programs available to the music community in Atlantic Canada in order to create a stronger, more sustainable Atlantic music sector.” – Amy Terrill, Executive Vice President of Music Canada