The Mastering of a Music City

The Mastering of a Music City, Key Elements, Effective Strategies and Why it’s Worth Pursuing represents a roadmap that communities of all sizes can follow to realize the full potential of their music economy. Truly global in scale, the report is the result of more than forty interviews with music community experts, government officials, and community leaders in more than twenty cities on every continent.

A Music City is a community of any size with a vibrant music economy. Beginning with artists and musicians, Music Cities are home to a broad range of professionals who support artist entrepreneurs in their career development. They contain spaces for education, rehearsal, recording and performance, and foster a live scene with an engaged and passionate audience that provides artists with a fertile ground for developing their craft.

The report finds that successful Music Cities with vibrant music economics generate a wide array of benefits for cities, from economic growth, job creation, and increased spending to greater tax revenues and cultural development. Here are a few examples:

The Mastering of a Music City identifies seven key strategies that cities both large and small can use to grow and strengthen their music economy:

The report explores these seven key areas, resulting in 31 recommendations that members of the music community, policy makers, and political leaders can all use as a source of inspiration and information in building a strong, more vibrant music community. This report follows the successful 2012 report by Music Canada entitled, Accelerating Toronto’s Music Industry Growth, Leveraging Best Practices from Austin, Texas. The Austin-Toronto report delivered significant results in Toronto where music is now identified as a key economic sector.

“This should remove barriers to performing and creating music,” says Graham Henderson, President of Music Canada. “Ultimately the goal is to create a more sustainable music community where artists and professionals can enjoy successful careers.”

“Our job at IFPI is to improve the environment in which our member companies operate and this report is one way that we can do that,” according to Frances Moore, IFPI Chief Executive. “Just imagine a world where you can go from country to country and find music cities in every one. That would be good for artists, good for record companies, good for city leaders and good for the wider public that just wants to enjoy great music.”

The Mastering of a Music City was launched at the annual international music trade conference, Midem, in Cannes where IFPI Chief Executive, Frances Moore, Music Canada Chief Executive, Graham Henderson, and Director of Midem, Bruno Crolot, spoke to their experiences working with creative and thriving music industries and the benefits that Music Cities bring.

“I am very pleased that Midem is associated to and welcomes such an important research for the music industry. Understanding how a city can truly benefit from a vibrant music economy and how to apply best practices from existing music cities to one’s own city is of tremendous interest to our international clients.” 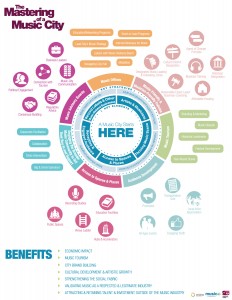