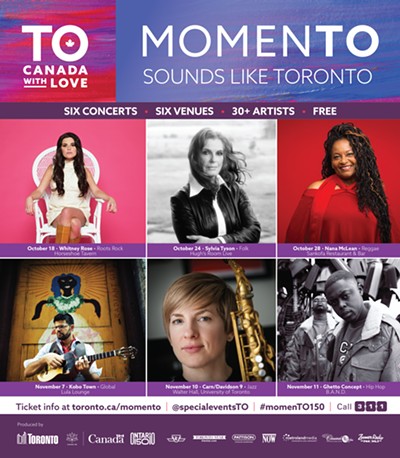 From Queen West to Little Jamaica, the unique sounds of Toronto’s music history are being showcased with a free concert series this Fall. MomenTO: Sounds Like Toronto celebrates Toronto’s influence on Canadian music, and is produced by the City of Toronto in partnership with the Government of Canada and the Province of Ontario’s Ontario 150 Program.

The series kicked off on October 18 with two roots-rock nights; one at The Horseshoe, headlined by Whitney Rose, and the other at Hugh’s Room, featuring legendary singer/songwriter Sylvia Tyson. Curated by renowned music journalist and historian Nicholas Jennings, the remaining shows will span a wide range of genres including reggae, world, jazz, and hip hop. These shows can be viewed below. While tickets are free, some shows will sell out and unclaimed tickets will be released at the door the night of the shows.