Today, the IFPI announced that Toronto hip hop artist Drake is the recipient of the IFPI 2016 Global Artist of the Year Award, which recognizes an artist’s worldwide success across physical and digital formats, including downloads and steams. Drake is the first Canadian to receive the award, and the fourth recipient since its launch in 2013. 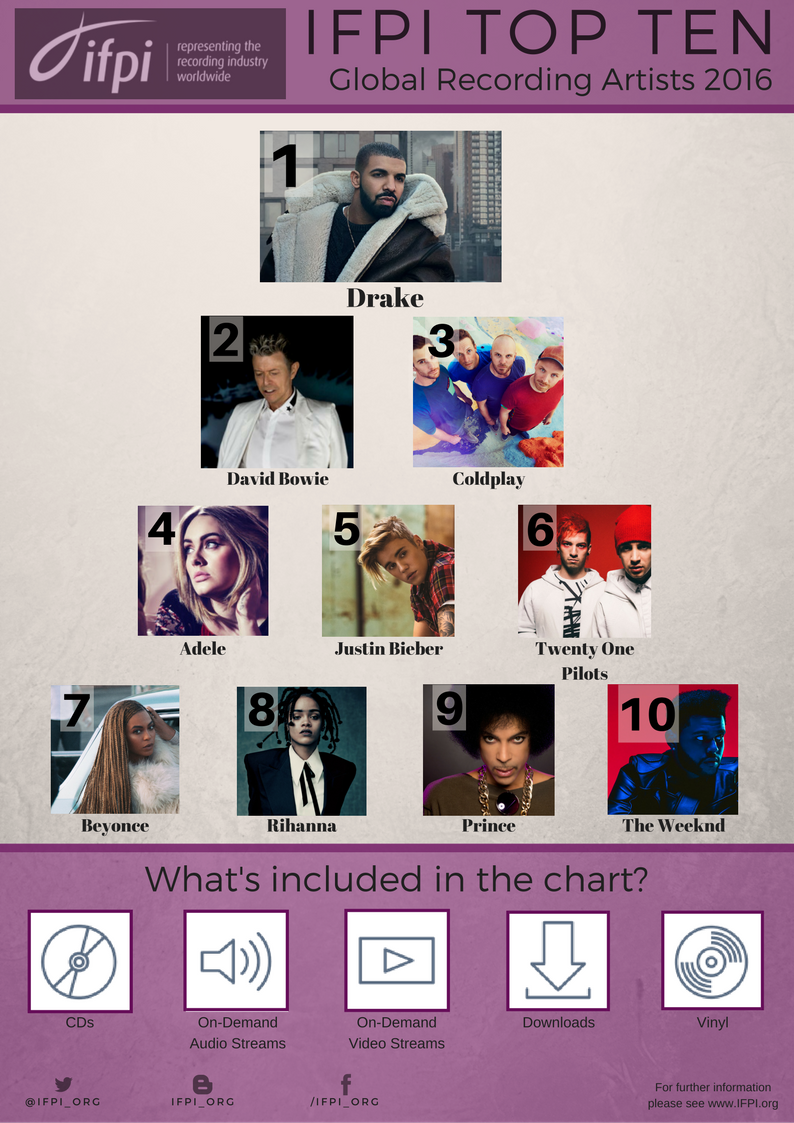 Joining Drake in the Top 10 chart are fellow Ontarians Justin Bieber and The Weeknd, who reached #5 and #10, respectively. All three artists also appeared in the 2015 Global Top 10 chart.

“I’m delighted to be able to honour Drake as the IFPI Global Recording Artist 2016,” says IFPI chief executive Frances Moore in a release. “Drake’s phenomenal success reflects how deeply his unique sound appeals to an enormous global audience. The Global Top 10 list features a number of amazing artists, and the variety and vibrancy of their art speaks volumes about the exciting state of music today.”

Drake’s 2016 Double Platinum album Views became the first album to reach one billion streams on Apple Music, while the album’s single and summer smash “One Dance” became the first song to be played one billion times on Spotify. In 2015, Drake appeared at number nine on the list.

Justin Bieber, whose 2015 album Purpose contained multi-Platinum singles like “Sorry,” “Love Yourself,” and “What Do You Mean?” lands in the fifth position, allowing for two Canadian artists to appear in the top five. This is the second consecutive year the Stratford, Ontario native has appeared on the list, after reaching the number four spot in 2015.

Multi-Platinum R&B sensation and Scarborough, Ontario native The Weeknd, who released his Platinum-certified album Starboy in late 2016, was announced as the number ten artist, matching his 2015 position on the chart. While his album JUNO Award winning album Beauty Behind The Madness was released in 2015, The Weeknd, born Abel Tesfaye, continued to see success through the start of 2016 with the album’s singles “Can’t Feel My Face,” “In The Night,” and “The Hills.”

One Direction were the first group to be named Top Artist by IFPI when the list began in 2013, which also included Canadian Michael Bublé in the ninth spot. Taylor Swift earned the award in 2014, and in 2015, IFPI named Adele as the top global recording artist, who appears at number four in 2016.