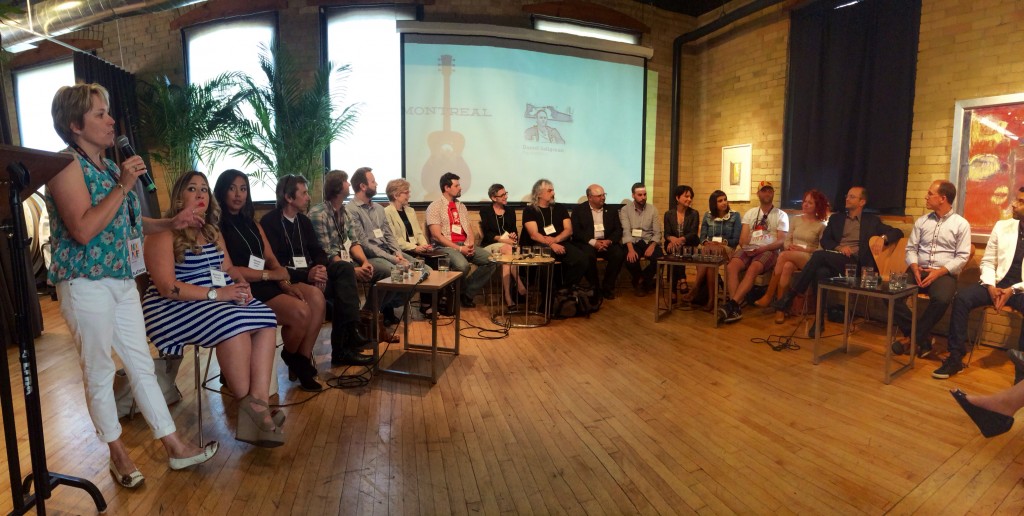 Public and private representatives from six cities gathered on Friday, June 20th to talk about music strategies in an event hosted by Music Canada, 4479, and NXNE. It was a twist on a panel – featuring 19 people in a moderated roundtable discussion in front of an audience. Video is now available, and is embedded below.

The cities represented were: Austin, Chicago, Hamilton, Kitchener, Montreal and Toronto. Kicking off the event, a new animated video was launched that summarizes the Toronto music city campaign led by 4479, and points out some of the best practices contained in Austin, Texas.
The fast-flowing discussion that followed covered a broad range of topics including:

Moderator Amy Terrill started by asking panelists (listed below) from each city to talk about common themes that appear in their music strategies. For instance, there is generally a strong recognition in each city about the economic value of music with highlights including job creation, tourism, and investment attraction. Many of the cities have established music offices in order to help music businesses and artists navigate city hall.

#MusicCityExchange @m_layton discusses importance of “making it easy” for music and musicians in this city. “Need to break down the silos”. — Graham Henderson (@GFHenderson) June 20, 2014

Support and promotion of artists is also a common theme with city strategies varying from grants in Chicago to a resource centre in Kitchener to live performance opportunities in Austin. Hamilton panelists discussed the value of hosting the 2015 JUNOs in terms of providing performance opportunities for local musicians and bands as part of the festival. Toronto musician Miranda Mulholland provided examples of challenges facing career musicians, urging communities to remember that it is the artists who are at the heart of every music community.

Value we put on musicians is important to the industry. @miramulholland praises Austin for this. #MusicCitiesExchange pic.twitter.com/ztQAhmlYwG
— 4479 (@4479Toronto) June 20, 2014

Music tourism was also discussed. Amanda Garcia of Austin described the coordinated effort to promote Austin music on the road and to conventions, including how they work with local agents in programming music at conventions in the city. Dan Seligman of Montreal pointed out that the city, tourism agency and festival presenters work in cooperation to attract music fans to the city and that millions has been invested in the downtown area to support large scale music events. Andrew Weir of Tourism Toronto confirmed that music is a big draw for Toronto.

In the audience were many members of the Toronto Music Industry Advisory Council and guests from each of the 6 cities, as well as Calgary and Banff, Alberta. There was overwhelming support for a repeat of the exchange with Kitchener’s City Councillor Berry Vrbanovic recommending a digital meet-up every quarter!
The panelists were as follows:

See some of the discussion from the panel in the video below: