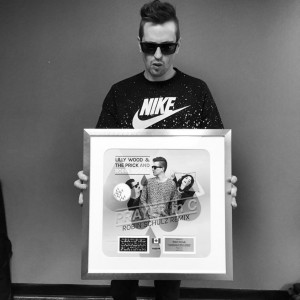 German house DJ Robin Schulz was in Toronto over the weekend for a series of performances including a Saturday night gig at electro-hub The Hoxton and a Monday evening meet-and-greet at HMV’s new downtown Underground performance venue. During the stop at HMV, Warner Music Canada presented Schulz with a Platinum plaque for his remix of “Prayer in C”, originally performed by Lilly Wood & the Prick.

Last night in #Toronto was INSANE with @Robin__Schulz! Meet Robin and catch his exclusive performance FREE at 6 PM at @hmvcanada Yonge & Dundas TOMORROW!

Schulz expressed his gratitude over receiving the award by posting a photo on his Facebook page, thanking his Canadian fans for their support of the track. A few Canadian tour dates remain on Schulz’s world tour including Vancouver on January 14 and Montreal on January 24.

The video for “Prayer in C” can be viewed below: