On November 13th, 2019, APTN published the first-ever National Indigenous Music Impact Study. This landmark report demonstrates the contributions made by the Indigenous music community to the wider music industry, as well as to the overall Canadian economy. 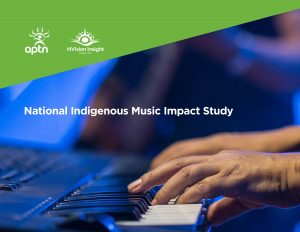 “We set out to gain a better understanding of this group of professionals, and what we found is that this industry has a significant impact on the economic and social fabric of Canada,” said Jean La Rose, CEO of APTN, in the news release. “However, the industry also faces challenges, which creates many opportunities for growth. We see this study as a starting point for in-depth and informed discussions that will help the industry reach its full potential.”

“Music Canada was proud to partner with APTN on this study, which highlights the important impact Indigenous artists have on the music ecosystem,” said Graham Henderson, President and CEO of Music Canada. “As the first comprehensive study of the Indigenous music industry in Canada to date, this report is contributing to a better understanding of the Indigenous music community’s impact from an economic, social, and cultural perspective.”

The study surveyed 620 respondents from the Indigenous music community in Canada and produced key findings, including the following:

Notably, the study found that there is no agreed-upon definition of Indigenous music. It cannot be constrained into a single genre, as the Indigenous music community today is characterized by an immense diversity of styles and experiences.