Music Monday 2014: On May 5th, join the Canada-wide celebration of music in our lives & schools

On Monday, May 5, 2014, join the Canada-wide celebration of music when schools and communities from coast to coast unite in singing and performing the Music Monday theme song ‘I.S.S. (Is Somebody Singing.’ This year, Music Monday celebrates its 10th anniversary with a live webcast of simultaneous events happening across the country, concluding with a synchronized performance of ‘I.S.S. (Is Somebody Singing’ with former Canadian Space Agency astronaut Chris Hadfield and Maestro Bramwell Tovey of the Vancouver Symphony Orchestra. 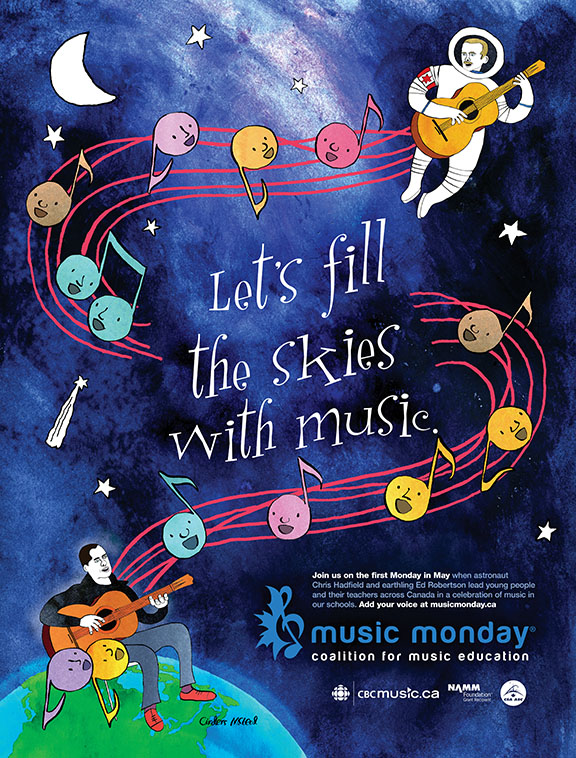 is an initiative of Music Makes Us: Coalition for Music Education, a national advocacy organization promoting quality music education for all young people. The annual event takes place on the first Monday in May, with the goal of celebrating the galvanizing power of music in Canada and demonstrating how that power is rooted in school music programs. Each year, hundreds of thousands of Canadians take part in the event through their schools and communities; last year’s event engaged approximately one million people in Canada and abroad.

To get involved with Music Monday, download the Participation Toolkit, and register your event online. To find an event happening in your area, search the Music Monday Map, which already dotted with events from coast to coast.

To prepare for sing-along, download the arrangements for ‘ISS – Is Somebody Singing’: there are vocal lead sheets as well as scores for bands, drumlines, ensembles, guitar, steel pans, strings, and much more. There are also translations available for the song in eleven different languages, including American Sign Language, Cree, Dutch, French, Gaelic, German, Inuktitut, Italian, Japanese, Ojibway, Russian, and Spanish.

The Coalition for Music Education is also looking for youth reporters to cover Music Monday 2014, and has launched a new essay contest to find thirteen students from across Canada, who will represent their province as a Music Monday Roving Youth Reporter and be given the opportunity to interview a prominent Canadian on the subject of music and music education.

In the above video, Commander Hadfield articulates why music education is so important:

“I bought my first record at about nine or ten years old, and listening to music introduced me to cultures and people who were different than I was. And learning to play the guitar taught me to improvise and to be creative, and to be able to be play with a group. And practicing on that guitar, that taught me self-discipline. And these were all fundamental skills that I have used throughout my career. And that’s why I can confidently say that music helped me be a better astronaut.”

Music education is a key priority of Music Canada as one of our five strategies in The Next Big Bang report, which recommends that given the strong evidence that music education prepares workers who are more creative, better problem-solvers, and possess soft skills that are critical in the digital economy, as well as the correlation between music scenes and tech clusters, governments should invest more in music education and should consider music scenes as a tool for economic development.

For more information on Music Monday, visit http://www.musicmonday.ca/, and connect with them on Facebook and Twitter for future updates.

The Canadian Country Music Association (@CCMAofficial) has issued a job posting for a Head of Operations, who will play a key role in helping to strategize the association’s overall direction, growth and day to day operations.