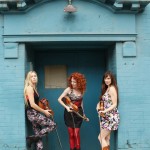 Canadian singer and fiddler Miranda Mulholland is currently on tour with Belle Starr, with stops across Canada and the US. She’ll be sharing her experiences in our Notes from the Road tour blog series.

A funny thing happened at the Canadian border the other night. As a band named for a famous outlaw, we shouldn’t be surprised by any skirmishes with the law, but this brush up got me thinking. After explaining where we were coming from and where we were going while crossing the border at midnight, the patrol guard actually asked us with condescension, pity and bewilderment “Is this really the way you make a living? All three of you?”

I am not surprised she asked. We did make a funny picture – packed tightly with our instruments, suitcases and merchandise in my 1998 Toyota Corolla. We had just played a two hour concert in Stowe, Vermont then negotiated some very treacherous roads for hours in a heavy snowstorm post show to reach where we would be sleeping that night so we were all rattled and pretty tired. Certainly not what one pictures when one dreams of being a touring musician.

For the majority of musicians, touring these days is not the glamorous or wild lifestyle depicted in movies, TV shows and books. That’s not to say these things don’t happen – you can buy me a glass of wine sometime and I can tell you some stories – but the quotidian existence of a touring musician is one of a lot of hurry up and wait, a few crippling lows and some exuberant highs for a very small paycheque. Somehow it seems to even out.

Our band, Belle Starr is a bit of a rarity as although all three of us are full time musicians, we don’t get to spend a lot of time touring together. Stephanie Cadman is a world class tap/step dancer as well as fiddler and was in the Toronto production of the musical Once. Kendel Carson plays in a duo with Dustin Bentall as well as being a member of Alan Doyle’s band and I am a member of Great Lake Swimmers among other projects. This makes it all the more special and exciting for us when we get to play music together.

We started this tour by flying to Alberta and driving up and down that beautiful province. Routing is rarely ideal and found us back and forth on the same stretch of highway a number of times and landing three days in a row for a needed coffee stop at the Red Deer Mall. I never thought I’d see that much of the Red Deer Mall.

The drive from Calgary to Cranbrook is one of Canada’s best. Watching the mountains appear to slowly rise up in front of you like benign giants watching over the rolling meadows of cows, horses and crops. While there are many long drives touring in Canada (Toronto to Winnipeg is 24 hours!) we really do have some of the most beautiful and diverse scenery in the world. And we see a lot of it! Sometimes the drives can be easy – a clear day, sunshine and empty road. We had our fair share of that on this tour but also torrential rains for hours, elk on the highway, twisty mountain roads and one of the scariest car crashes any of us had ever seen happen right in front of us. It takes nerves of steel sometimes! 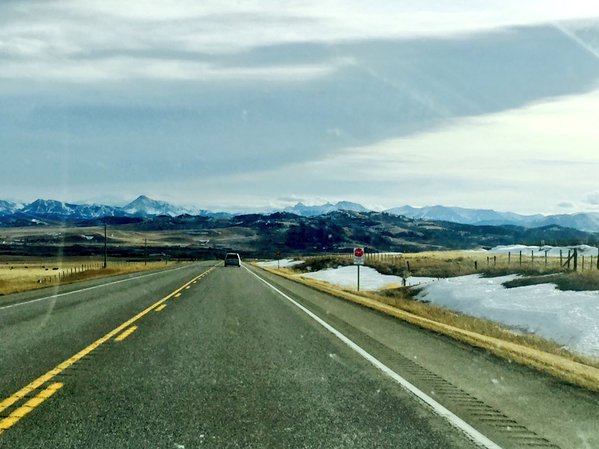 Vancouver was next and we indulged in some delicious sushi and caught up with friends. One of the best parts of touring is getting to visit with pals all over the world – In contrast though, one of the hardest parts is not really ever being part of friend’s lives – not getting sharing the little victories and the hard times, birthdays, special occasions and casual hangouts. It seems to be an endless series of catch ups with hurried dinners between soundcheck and the show.

Crossing the border into the USA is always a bit difficult. Even with our very expensive permits to perform in the United States, it is not always a guarantee that we will get across. We had a lovely officer on this crossing who wished us a safe trip, so we breathed a collective sigh of relief. The spring-like weather down the coast was very welcome and we enjoyed the green and blossoms beginning.

Mondays and Tuesdays are hard to book so we had two days off in groovy Portland. Great coffee, amazing vintage stores and my favourite bookstore in the world, Powell’s. Instead of a hotel, we opted for an AirBnB to take advantage of laundry and save some money by cooking and catch up on sleep. It was such a treat to not have to drive anywhere for 48 hours!

The biggest performing highlight of the west coast tour was just around the corner. The Admiral Theatre in Bremerton, WA was built in 1942 as a movie theatre and was beautifully remodeled in 1997. It has a water theme with mermaids and waves and one of the only remaining steel marquees left in the USA. The staff were very professional and friendly and the audience was warm, appreciative and really made that show tremendously memorable. 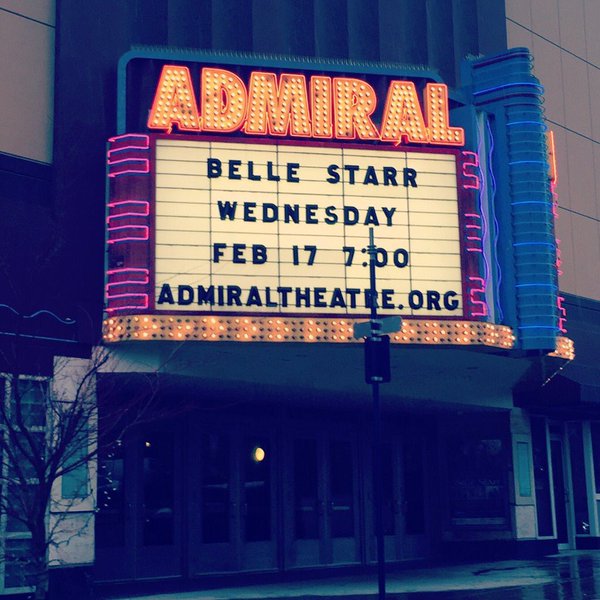 Live music is all about alchemy. Creating something from simple elements into something unforgettable and valuable. What happens during a performance happens because all those elements are there and once over, can never be recreated. The audience has as much to do with this chemistry as the artists – it is a symbiotic relationship. This is what I love most, the ephemeral quality of live music. It happened. We heard it, felt it, experienced it – and it can never truly be captured, and that is what makes it so special.
Is this really the way I make a living? Why, yes. it is. Sometimes it’s the wild west out here, it can be really tough, but the highs are really high…and I couldn’t be more proud to make my living this way.