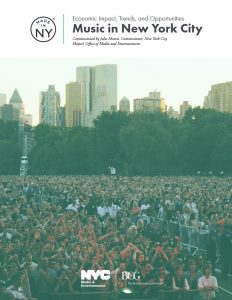 A new report has established New York City as one of the largest music ecosystems in the world. The “Music in New York City” report, the first-ever economic impact study of the city’s music industry, was commissioned by the Mayor’s Office of Media and Entertainment (MOME) and it found that the music sector supports nearly 60,000 jobs, accounts for $5 billion in wages, and generates $21 billion in total economic output for the city.

When Mayor Bill de Blasio appointed Julie Menin Commissioner of the MOME in February 2016, the role of the agency was expanded to include music. This was the first time that a New York City agency had been given a mandate to support and promote the music industry. This study was considered an essential step to help the MOME understand the music sector’s scale, landscape, challenges, and opportunities.

“Music is an inclusive force and economic driver in this City,” said Mayor Bill de Blasio. “As we continue to build good jobs for New Yorkers, we see that raw talent and homegrown energy has built a powerful local industry. Together, we will continue to grow that success.”

“The music industry is a vital part of the city’s creative economy and we are thrilled to be its go-to agency in the City,” Mayor’s Office of Media and Entertainment Commissioner Julie Menin said. “This first-of-its kind study details the substantial amount of economic activity that all aspects of this rapidly changing sector of the entertainment industry generate in the City. The study also squarely reaffirms New York City’s status as the music capital of the world. Because of the City’s resilience and resourcefulness, New York has weathered changes in the music industry better than other cities and has come out on top. We look forward to building on that momentum and working with the industry to help it continue to grow and thrive.”

According to the report, the four key pillars of the city’s music ecosystem are local artist communities, mass music consumption, the global record business, and infrastructure and support services. These are directly responsible for approximately 31,400 jobs, $2.8 billion in wages, and $13.7 billion in economic output. 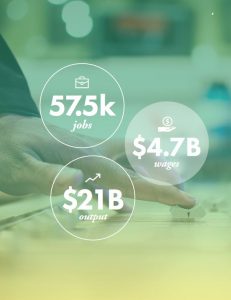 The economic impact of the sector is broken down in the report; the key findings are as follows:

The report identifies rising real estate prices, high cost of living, and the global disruption ushered in by digital services and technologies as challenges facing the music sector. It notes that many smaller venues have closed in recent years, and that many artists are seeing their income from record sales decrease while the demand for live performance slots increases.

The study recommends that the city capitalize on opportunities to:

You can read the city’s press release here.

And read the report here.

Watch today's (April 9) #COVID19 press conference live at 3:45 p.m. with @epdevilla, @ChiefPeggTFS and @JohnTory about the current situation and response in #CityofTO. Briefings to occur daily at 3:45 p.m. unless otherwise advised.

Want to know more about the Government of Canada’s financial measures to help you get through the COVID-19 pandemic? Ask Charlie what measures are available for you! #CdnTax #COVID19 #CERB
http://ow.ly/fVGE50z9npm

If you want to wear a mask, a homemade cloth mask can help protect those around you. Get the facts here:
http://ow.ly/qe1750z9ldb #COVID19

If you were born in the months of October, November or December, and are eligible for the Canada Emergency Response Benefit, apply today! More info on how to apply and eligibility: http://ow.ly/aXmq50z9QTJ #COVID19