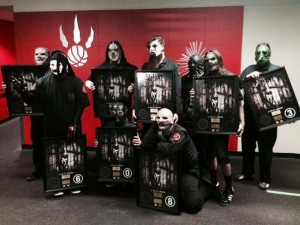 With a new album and tour announcement, fans of American heavy metal act Slipknot had a lot to look forward to by the end of the 2014 summer. In late October, the band released their fifth studio album .5: The Grey Chapter and almost immediately took to the road for a North American arena tour along with openers Korn. On Sunday night, the infamous masked rockers arrived north of the border for a concert at Toronto’s Air Canada Centre, the only Canadian date on the current tour.

Prior to their performance, Warner Music Canada and Roadrunner Records Canada presented the band with Gold plaques for the The Gray Chapter, which was certified only a month after its release date. The album title is a reference to the now late Paul Gray who passed away in 2010.

As reported by Aesthetic Magazine, frontman Corey Taylor revealed the plaques on stage in front of the ecstatic crowd, informing them that Canada is the first country to have the album certified. He went on to say “thanks for keeping the spirit of metal music in Canada.”

Check out the video for “The Devil In I” below: