As you know, I have been monitoring Google search results since the announcement by Google about priority ranking. Week 3 and no change in the results for “Call Me Maybe download”:  the iTunes link remains mired on page 2 behind a virtual bevy of links to illegitimate sites like beemp3, hulkshare and mp3skull.

Incidentally, the #1 song today in Canada, We Are Never Ever Getting Back Together by Taylor Swift, faces a similar fate.

Ironically, while performing this weekly experiment, I discovered that previous Google anti-piracy announcements aren’t quite living up to their billing either.

In December 2010 Google proudly announced it would combat piracy through a variety of measures including eliminating piracy-related terms from auto complete. For instance, if you type in “Call Me Maybe” it won’t fill in “torrent”. However, as you can see, two well known pirate sites, “bee” and “sharebeast”, do appear in the auto complete options.   Good intentions but batting ‘O’ for ‘2″? 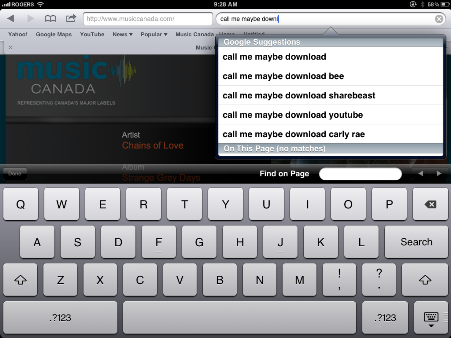