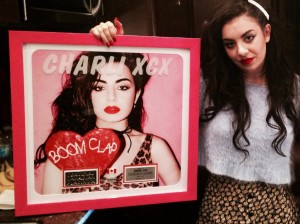 UK singer/songwriter Charli XCX had quite the summer in 2014. After reaching #1 with her appearance on Iggy Azalea‘s summer anthem “Fancy”, Charli XCX earned a Canadian Platinum certification for her own song “Boom Clap”, which was featured on the soundtrack for the The Fault In Our Stars. Prior to her sold out show in Toronto, Charli XCX was presented with a Platinum award plaque for “Boom Clap” from the Warner Music Canada team, along with a plaque commemorating the #1 position of the song on Canadian CHR/Top 40 radio.

Prior to her SOLD OUT Toronto show, we presented @Charli_XCX with her well deserved awards! pic.twitter.com/rJ4C1lcMbs

Check out the video for “Boom Clap” below: