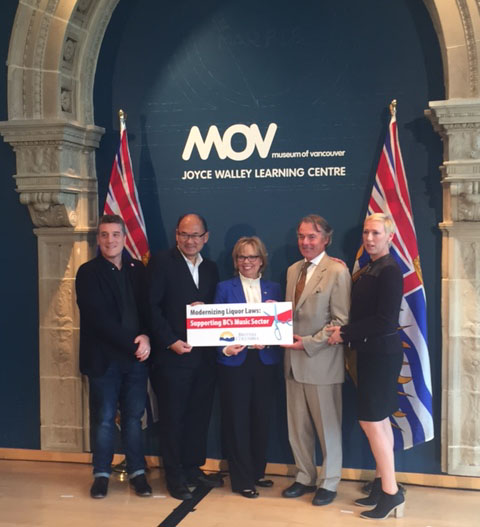 Coralee Oakes, British Columbia’s Minister of Small Business and Red Tape Reduction, has announced that the government will simplify the Special Event Permit application process for music festivals, concerts, and other cultural events.

Previously, only non-profit entities could apply for Special Occasion Licenses, which allowed them to sell liquor at music festivals. This meant that music festival operators had to bring in a separate charity to serve alcohol at their events. It added another layer to the application process and was viewed as a regulatory burden.

With these changes, music festivals will be able to apply for their own Special Event Permits and enter into exclusive agreements with liquor manufacturers. The changes will also allow event promoters to enter into advantageous partnerships with breweries, wineries, and distilleries.

“These changes are the result of consultations with industry and an important step forward in our continued work to modernize B.C.’s liquor laws by cutting red tape for businesses,” said Minister Oakes. “We expect these changes will increase the number of special events held throughout B.C. and strengthen patronage of the arts in our communities.”

Music Canada President, Graham Henderson, who attended and spoke at the announcement in Vancouver characterized this policy change as a continuation of the government of BC’s commitment to music and a crucial component of a larger BC Music Strategy. Earlier this year, Premier Christy Clark announced a $15 million investment in the BC Music Fund.

“B.C. has a deep musical heritage and is home to some of the finest production facilities, artists, and labels in the world,” said Henderson. “We’re very happy to see the Province make changes that can better position B.C. to compete in an increasingly global marketplace.”

Check out our report: BC’s Music Sector: From Adversity to Opportunity

Music Canada welcomes the creation of ADVANCE, Canada's Black Music Business Collective. We look forward to working with you and supporting the goal of a more equitable Canadian music industry.