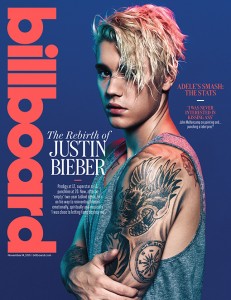 Current Billboard Magazine cover star Justin Bieber, whose Double Platinum track “What Do You Mean” landed at #5, debuted at #2 this week behind Adele’s “Hello” with “Sorry”.

Toronto-based R&B superstar The Weeknd also has two songs in the Top 10 with “The Hills” at #4 and his summer smash “Can’t Feel My Face” at #10.

Drake‘s “Hotline Bling” came in at #3, while Shawn Mendes‘ “Stitches” is at #6 above tourmate Taylor Swift’s “Wildest Dreams”.

All four of these Universal Music Canada labelmates made headlines last week when they occupied the top 4 spots on the Hot 100.

With Alessia Cara‘s “Here” rising to #15 this week, it’s safe to say we are witnessing one of the most exciting times in Canadian pop music history.