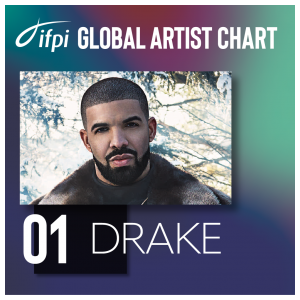 Drake earned the top spot following the global success of his fifth album Scorpion, which was officially certified Double Platinum in Canada in July 2018, and includes the hits “God’s Plan” (8x Platinum), “In My Feelings (5x Platinum), “Nice For What” (4x Platinum). The 25-track double album broke multiple global records in its first week of release, including being the first album to reach one billion streams across all platforms worldwide.

“Drake has had an incredible, record-breaking year, one that is more than worthy of the title of Global Recording Artist of the Year,” says Frances Moore, chief executive of IFPI. “That Drake has won this award for the second time is testament to his continued global appeal and his ability to engage and connect with fans.”

Drake is the only Canadian artist to receive the prestigious award, with previous recipients including One Direction (2013), Taylor Swift (2014), Adele (2015), and Ed Sheeran (2017), who remains on this year’s list at number 3.

“This year’s Top Ten artists reflect the global appeal of music” Moore continues. “From modern-day superstars like Drake, Ed Sheeran and Ariana Grande, to the rise of genres such as K-Pop, to legacy acts like Queen, fans are exploring and enjoying music of all types and from all corners of the world.”