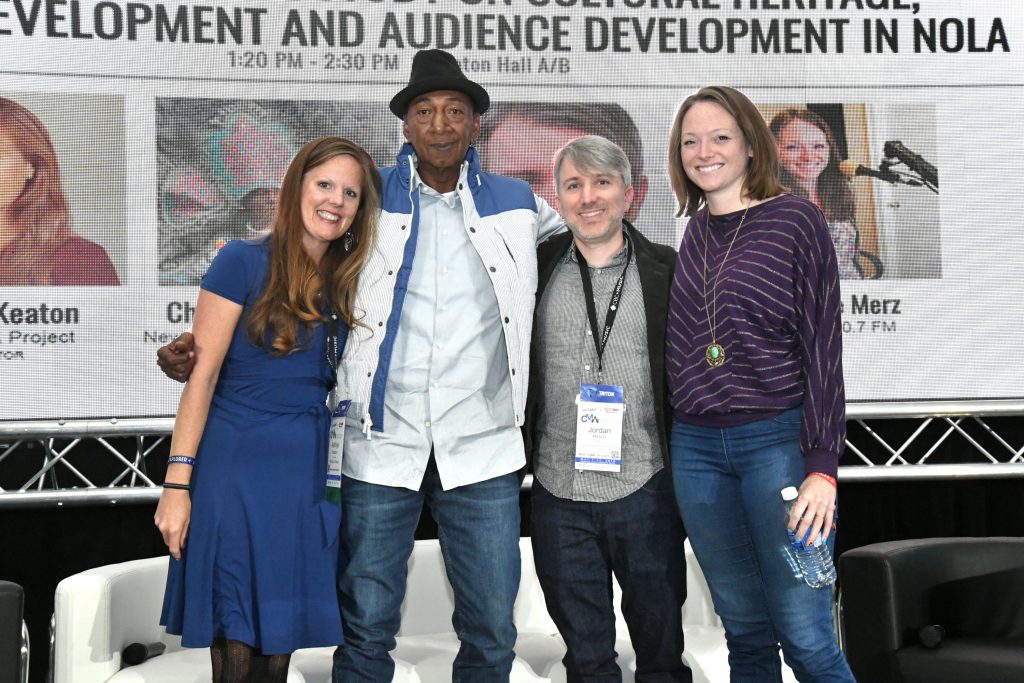 On Saturday May 12th, Music Canada held its third annual international Music Cities summit The Mastering of a Music City during Canadian Music Week. City professionals, policy-makers, industry executives, and music community members all gathered to discuss topics related to the value of music, its economic impact, and its relationship to innovative city planning and creative entrepreneurship. Click here to view more recaps from the summit.

The New Orleans: A Case Study on Cultural Heritage, Economic Development and Audience Development in NOLA panel examined the role that non-profit institutions have played in promoting historical and cultural preservation within the city. Panelists discussed how their organizations work to support the broader cultural ecosystem in New Orleans and advocate for a dynamic, creative city.

Amazing insight so far into the history and impact of @wwoz_neworleans from Melanie Merz! #CMW2018 #MusicCities pic.twitter.com/QA9YI9sERu

The discussion kicked off with a presentation from Melanie Merz on the significance of the non-profit community radio station WWOZ to New Orleans and the city’s vast musical community. Merz touched on the history of the station and its development into a cultural institution within NOLA.

She discussed how WWOZ came to specialize in music that represents the city’s cultural heritage, and detailed how the station became known for its support of local artists and musicians. Merz also touched on how WWOZ has become praised for its location broadcasts of live music events within the city, such as the annual New Orleans Jazz & Heritage Festival.

The panel then moved on to the next speaker Chief Howard Miller, who spoke about the history of the Mardi Gras Indians and their impact on the city’s Mardi Gras rituals and celebrations. Chief Miller recounted his experience growing up in the tribe, and detailed the extensive nine-month long process of creating hand-sewn, intricate suits for the parade each year.

Chief Miller went on to discuss the challenges faced by the Mardi Gras Indians in their fight to have their intellectual and creative ownership of their suits be legally recognized. Every year at the parade, photographs are taken of the Indians in their elaborate suits, which are then commercially sold in the forms of images, posters, as well as in magazines, books or art galleries. The heart of the issue is that these individuals are profiting off the community’s cultural and artistic creations without the Mardi Gras Indians being financially compensated for the use of their likeness.

Along with the legal assistance of Ashlye Keaton, Chief Miller successfully registered the first Indian Mardi Gras suit with the United States Copyright Office in 2010, under the basis of it being recognized as an artistic work (a sculpture), and not a piece of clothing.

Learning from New Orleans: when encouraging cultural tourism, amplify community voices but let them negotiate their own relationships with tourism and be respectful. #musiccities #cmw2018

The final panelist Jordan Hirsch discussed the significance of the project  A Closer Walk, an interactive map of New Orleans’ music history sites. A Closer Walk (ACW) project and site is presented by WWOZ New Orleans, the Ponderosa Stomp Foundation, along with 3 other sponsors. The project aims to highlight the numerous musical sites that the city has to offer, and in particular, bring to light some of the sites that have remained unmarked or unrecognized.

Hirsch highlighted how ACW is a first-of-its-kind collaboration that features historical experts and music specialists drawing from extensive archival footage and chronicles, from both privately and publicly owned collections. The website currently has features on 104 landmarks, but the ultimate goal is to present 300 landmarks on the map in honor of New Orleans’ tricentennial in 2018.

The panelists went on to discuss several different topics and reflect on the city’s rich musical history, and how this musical legacy can be protected and promoted to a wider audience.

Watch a video of the full discussion below, and stay tuned next week for a recap of another exciting panel.