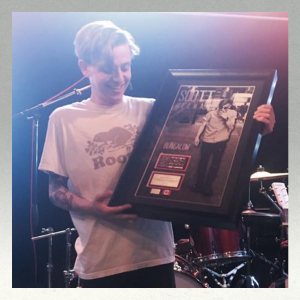 Students from Timmins High and Vocational School’ s music business course got a first-hand look at how hard work in the music industry pays off.

During a visit to Coalition Music in Toronto, the students were given an exclusive mentoring session by Canadian singer-songwriter Scott Helman, who was rehearsing for his upcoming tour in support of his soon-to-be-released debut full-length album, Hotel D’Ville.

Following a Q&A and full band performance, Coalition and Warner Music Canada surprised Helman with the first Platinum plaque of his career for his single “Bungalow.”

Helman was presented with his first ever Gold plaque for “Bungalow” in the summer of 2015, and “Bungalow” was certified Platinum during the first round of certifications for Music Canada’s new Single Award.

@ScottHelman rehearsing in the #CMchapel for his new tour! Tickets on sale tomorrow at 10am est at scotthelmanmusic.com

Bungalow is certified platinum. THANK YOU @WarnerCanada @GoldPlatCA and everyone who listened, bought, and shared the song! pic.twitter.com/h0FArxAEkl

The music video for “Bungalow” can be viewed below.