Earlier this month, the Standing Committee on Canadian Heritage released a report entitled A Vision For Cultural Hubs And Districts In Canada. This report was the outcome of a Committee study on cultural districts and hubs in Canada, with a particular focus on determining the role they play in city building, their economic impacts, their effects on arts and culture, and how the federal government can better foster and support the development of these spaces.

The Committee held eight meetings earlier this year, with Music Canada’s Executive Vice President Amy Terrill appearing as a witness during this process. 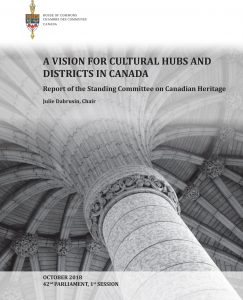 One of the key issues discussed in the report is how exactly a cultural hub and cultural district can be defined. Witnesses throughout the eight Committee meetings provided a number of different interpretations of what constitutes a hub or district, offering definitions that ranged from fairly encompassing to more rigidly defined. Music Canada has submitted our own recommendation regarding how cultural hubs and cultural districts should be categorized, in addition to recommending that the Department of Canadian Heritage’s definition for cultural hubs be expanded. It was encouraging to see that the official Committee recommendation reflected this assertion, with the specific language calling on the Department to “broaden the definition of a cultural hub to, among others, consider new technological art forms.”

Another important topic highlighted in the report outlined the various collaborative approaches that can be taken to developing cultural hubs and cultural districts. Alongside the role of the government, partnerships have been found to be the key to the successful creation of projects relating to cultural hubs or districts. Indeed, as EVP Amy Terrill highlighted in her testimony before the Committee, collaboration between the for-profit and not-for-profit sectors is a critical component of cultivating a flourishing network of cultural spaces and sustaining a vibrant cultural sector.

Other key issues that were outlined in the report include:

Read the Standing Committee on Canadian Heritage’s full report on the House of Commons website.