The Mastering of a Music City Summit at CMW 2019: Recap

On Saturday May 11th, Music Canada held its fourth annual Music Cities Summit during Canadian Music Week. This year’s summit was hosted in partnership with the Music Policy Forum, and the event featured a plethora of local and international speakers who gathered to discuss issues regarding the value of music and its relationship to creative city-planning.

The morning kicked off with opening remarks from Music Canada’s Vice-President of Strategic Initiatives Sarah Hashem, as well as remarks from Ashlye Keaton of the Music Policy Forum.

The keynote address was given by Chris Campbell, Director of Culture & Entertainment Tourism and Tourism London. Campbell spoke about the journey to get Canadian music’s biggest milestone to London, Ontario: the JUNO Awards.

As Chair of the JUNOs host committee, Campbell worked with a team to pitch London as the right home for the awards in 2019. He discussed how the city was a bit of an underdog in the selection process as it was much smaller than many of the cities that have hosted the JUNOs in the past. Campbell also outlined the steps the team took to successfully stage a series of live music events throughout JUNO Week across London. 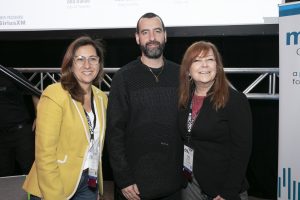 Chris Campbell’s illuminating keynote presentation was followed by a fascinating conversation on the intersection between the nighttime economy and music strategies. This immersive discussion took place between Mirik Milan, the first Night Mayor of Amsterdam; Kate Becker, the former Director of the Seattle Office of Film + Music; and Toronto City Councillor Ana Bailão, who has long been a champion for locally based projects in the arts space.

The trio discussed the economic and social benefits of having a thriving night time economy, and Councillor Bailão emphasized how a city’s vibrancy is enhanced by having a strong community of artists and musicians living, working, and creating. 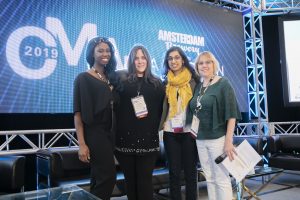 The next session examined the topic of inclusivity and diversity in the context of a music city. Amy Terrill introduced the keynote video, given by Mark Roach of Recorded Music New Zealand. In the video, Roach spoke about the efforts taken by his city of Auckland to ensure that the Māori language and culture was given proper respect, and incorporated into their music strategy and policies.

The panel component of the session then commenced, moderated by Charlie Wall-Andrews. In addition to serving as the Executive Director of the SOCAN Foundation, Wall-Andrews was also selected as the Vice-Chair of Music Canada’s recently instituted Advisory Council. Joining her on stage was artist and creator Domanique Grant and Kanika Gupta, an artist and social innovator. The discussion ranged from steps organizers can take to ensure that their events are inclusionary in nature, to how cities can ensure the the foundation of their music strategies provide support for segments of the music community that may be traditionally underrepresented. 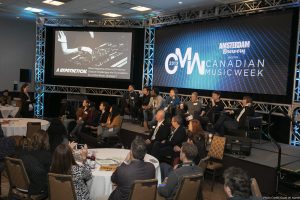 For many, the highlight of the Music Cities Summit was the session exploring the topic of DIY music spaces, and their relation to the cities they reside in. Inspired by an event hosted by Melbourne Music Week in 2018, this innovative session was based on a hypothetical scenario: in a fictional city, a beloved underground music venue has just been forced to close. The reaction on social media has been swift. A local artist posts on social media how disappointed they are – this is the venue they got their start at. A public backlash ensues. As the days pass, more information regarding how and why this venue shut down becomes available, making the situation even more complex.

The session was hosted by Darlene Tonelli, founder of Inter Alia law and member of Music Canada’s Advisory Council, who guided the room through this exercise as they collectively worked through the twists and turns of this social dilemma. The session featured a ‘panel,’ composed of key stakeholders including artists, DIY venue operators and promoters, City officials, music industry professionals, and fans. As the scenario developed, they were called upon to offer 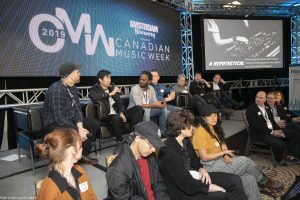 their insight and expertise, and describe their course of action at critical flashpoints of the scenario.

After a networking lunch, the afternoon kicked off with an engaging panel that explored the topic of music incubators and co-working spaces. Moderated by Sarah Hashem – Music Canada’s Vice President, Strategic Initiatives – the session featured input from some fantastic panelists: Chris Corless, Founding Partner at Toronto’s Signal Creative Community; Toni Morgan, founder of the Beat Academy; and Mustafa El Amin, founder and Executive Director of MyStand Mentorship and NorthBlock Entertainment.

The conversation highlighted how creative incubators and hubs can help artists gain access to resources and support that they otherwise might not have the opportunity to. The panelists went on outline the various ways that new models of co-working can help level the playing field for creators – particularly young and emerging artists and producers.

The next session examined how to effectively build a coalition when developing a music city. A keynote presentation was given by Erin Benjamin, the CEO of the Canadian Live Music Association, and took a deeper look at the organization’s successful first five years. The session then moved into a panel discussion, moderated by Michael Bracy of the Music Policy Forum. Participants included Katherine Carleton, Executive Director of Orchestras Canada; Cody Cowan, founder and Executive Director or Red River Cultural District in Austin; and Katie Tuten, co-founder of Chicago music venue The Hideout.

This year, the Music Cities Summit also featured two exciting ‘Masterclass’ sessions. These interactive, discussion-based seminars allowed the speakers to interact directly with participants in the room, often answering questions and offering direct advice based on their extensive experience in the music city world.

The first Masterclass was entitled ‘Strategy Development – Back to Basics’. Leading this in-depth conversation were four practitioners in this space: Mike Tanner, Toronto’s Music Sector Development Officer; Jarrett Martinaeu, Cultural Planner from the City of Vancouver; the City of Ottawa’s Kwende Kefentse; and Maryann Lombardi, Chief Creative Economy Officer at the DC Office of Cable, Film, Music and Entertainment.

The second Masterclass featured cutting-edge research from two major players in the music city field. Amsterdam’s Mirik Milan – who spoke about the research being conducted at Creative Footprint, a global civic initiative that measures and indexes creative space – and Peter Schwarz of Sound Music Cities, who took the attendees through his organization’s work implementing their Austin Music Census method in Pittsburgh, Charlotte, Seattle, and Washington, DC. 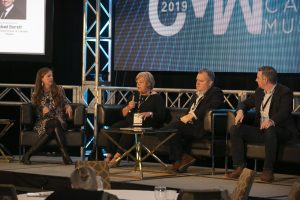 The last session of the day was a spotlight on the impact and benefits of music tourism for a city. The panel was moderated by Ashlye Keaton (the Ella Project; Music Policy Forum), and featured opening remarks by MP Michael Barrett (Leeds-Grenville-Thousand Islands and Rideau Lakes). MP Barrett also participated in the panel discussion, alongside London’s Chris Campbell and Leah Ross, the Executive Director of the non-profit Birthplace of Country Music.

The panel explored questions related to how a city can make sure its music tourism is authentic to  the city, has an economic impact, balances the needs of residents, and – ultimately – benefits the artists who help drive this attraction.

It was fantastic to participate in the discussion on Music Tourism, and to underscore the importance of forming relationships with all levels of government, at @CMW_Week – thanks to @Music_Canada. #MusicCitiesSummit https://t.co/49gu1AdCsL

The day ended with a post-summit reception at the co-working space Signal Creative Community, hosted by the City of Toronto. Mayor John Tory also attended and provided some insightful remarks highlighting the benefits of municipal support for music, touching on some of the recent exciting achievements in Toronto.

Thanks to all those who participated and attended Music Canada’s fourth annual ‘Mastering of a Music Cities Summit’.