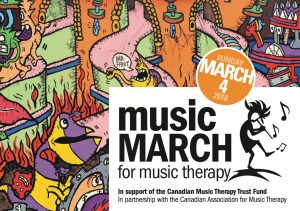 The march will take place along Bloor Street West, which is a new route for the annual family-focused march. Participants will depart from the Music Therapy Center (1175 Bloor St. W) at noon and will end at Lee’s Palace (529 Bloor St. W) around 1:15pm, where amazing entertainment, delicious food, fun activities, and tons of auction prizes await.

This year’s fundraising goal has been set to $25,000 in honour of the charity’s 25th anniversary, which works to enhance our communities by providing accessible music therapy to our nation’s most vulnerable and underserved populations.

The march is free to attend, while the after party at Lee’s Palace will be $25 at door unless the attendee has made a fundraising page. Those who would like to donate to the fund but cannot attend the event can do so at the same page. Stay tuned to the Facebook event page for more information on the afternoon, including the reveal of this year’s musical ambassadors and performers!