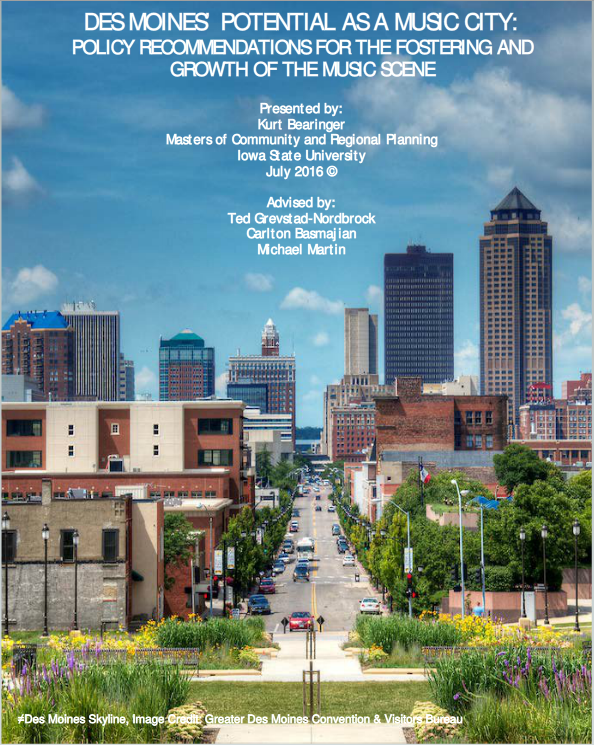 Music Canada’s The Mastering of a Music City report continues to attract interest and generate important conversations about Music Cities and music policy in cities around the world—this time in Des Moines, Iowa.

A new report, entitled “Des Moines’ Potential as a Music City”, has sparked local media attention and a discussion about what the Iowa capitol can do to realize its ambitions of becoming “the next Austin, Texas.” The report was authored by Kurt Bearinger at the Iowa State University and draws heavily from Music Canada’s The Mastering of a Music City report, a local survey, and various interviews with members of the local music community and music policy-makers.

Des Moines tops national city rankings, notes the report: it is Business Insider’s number one city for the middle class, Forbes’ 2014 best city for young professionals, and Fortune’s 2014 number one up-and-coming downtown. But despite the significant musical talent that comes from the city—and Des Moines is home to several music festivals and a vibrant music scene—it has yet to earn recognition as a Music City.

To fix this, the report makes fourteen recommendations directed at the City of Des Moines. These recommendations include: policy changes that would reduce regulations that affect the owning and operating of a live music venue, investigating music and cultural districts in the city, and beginning a Music City branding campaign. One recommendation specifically references Toronto’s Music Directory as a best practice to be emulated.

“It is my hope that this report will spark positive changes to the Des Moines music scene and be used as a tool convincing the City and Council to prioritize live music, partner with the music community, and create a city identity around live music,” says Bearinger, author of the report. “If followed, the sixteen policy recommendations could set the foundation needed to transform Des Moines into a nationally recognized music city.”

You can read a digital copy of the report here.