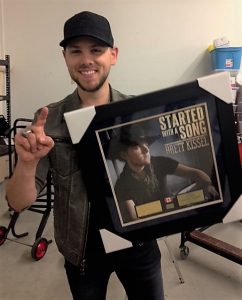 On Saturday, June 18, 2016, Canadian country star Brett Kissel returned to his hometown of St. Paul, Alberta, for a special sold out concert at Jaycee Ballpark. Dubbed the Hometown Homecoming, Kissel performed for over 3,000 fans in attendance, and thousands of more listeners across the province through a live broadcast on 840 & 910 CFCW.

‘It’s hard to put into words,” said Kissel of the special evening, “I’m blown away by the excitement and atmosphere. It really was surreal and so, so special to be performing for so many fans, family, friends, and people I grew up with who’ve supported me since the beginning, in my hometown. It was an awesome night.’

During the show, the JUNO Award winning artist was presented with a Gold plaque for his 2013 debut single “Started With A Song,” certified earlier this year. Kissel has previously received a Gold plaque for his single “3-2-1,” and posed with his latest plaque backstage following his monumental performance.

The event also raised over $60,000 for local charities and non-profit organizations, including a $10,000 donation from Kissel and event producers. $5,000 was donated to local cancer-support society Haying In The 30s, and another $5,000 was directed to Fort Murray fire-relief efforts.

The video for “Started With A Song” can be viewed below.