“Today, as we mark our 15th anniversary, we are celebrating the reinvention of a great legacy,” said Iain Taylor, CEO of Cadence Music Group, in a release. “Cadence Music is the new face of a re-energized music company that is reaffirming its place in the indie music scene. With our deep well of expertise, infrastructure and business relationships, we are uniquely positioned to maximize opportunities for artists and labels not only in Canada, but also on the global stage.”

Among the attendees Tuesday night were the Hon. Michael Coteau, Ontario Minister of Tourism, Culture and Sport, Toronto Mayor John Tory, and a cross-section of over 250 guests from Canada’s music sector, government, and other music industry stakeholders. 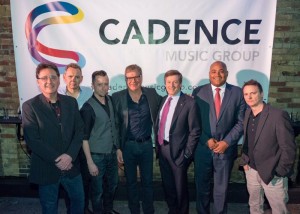 “Huge congrats to our Canadian family on the launch of Cadence Music,” remarked Alabama Shakes, who are on the Cadence Music label in Canada. “We thank them for all their hard work in helping us reach Gold status on our albums Boys & Girls and Sound & Color. Looking forward to our new adventures together!”

Cadence Music will continue to provide a full range of services that marry music and commerce under a single umbrella, which include:

“Maple has been a pioneer in our business, showing us all that independence and success need not be mutually exclusive,” says Cadence shareholder and key strategic partner Jeffrey Remedios, President and CEO of Universal Music Canada. “Cadence is the future. Iain and his team have already made important new strides and I’m excited for what will come next.”

Great to be at MapleCore earlier this week to celebrate 15 successful years! pic.twitter.com/LuyJJrxrOm

Pleased to welcome #Toronto mayor @JohnTory to the Cadence Music family as a new member of @wearecairo! #reinvention pic.twitter.com/UWpGO2zvPa