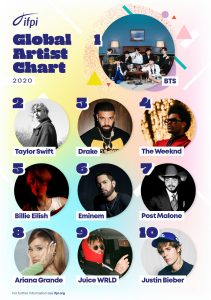 IFPI, the organization representing the recorded music industry worldwide, announced their Top 10 Global Recording Artist Chart today, which recognizes the top-selling artists around the world, and across all formats. Topping the chart as the Global Recording Artist of the Year is BTS, whose album MAP OF THE SOUL : 7 was released in February 2020 as one of the most pre-ordered albums of all time, and quickly reached #1 on the charts in more than 20 countries, including Canada. BTS are the first Korean act to win the accolade, as well as the first winner to perform primarily in a language other than English.

The unique award is calculated based on an artist’s or group’s worldwide performance across digital and physical music formats during the year, from streams to vinyl, and covers their entire body of work. The IFPI Global Recording Artist of the Year Award and the Top 10 chart is the only ranking to accurately measure consumption across all formats (including streaming channels, digital and physical album and singles sales) and all countries. It is weighted based on the relative value of each method of consumption.

“BTS are a global phenomenon,” said Frances Moore, IFPI’s Chief Executive. “They have had another outstanding year, releasing three albums, and continually finding creative and engaging ways to share their story with the world. They truly show the power that music has to bring joy and happiness to people the world over.”

Fellow Canadians The Weeknd and Justin Bieber also return to the Top 10, with The Weeknd earning the #4 position in large part due to the global success of his album After Hours, which was the #1 album in Canada for 6 non-consecutive weeks in 2020. Justin Bieber made his third career appearance on IFPI’s Top 10 chart, earning the #10 spot following the success of his album Changes.