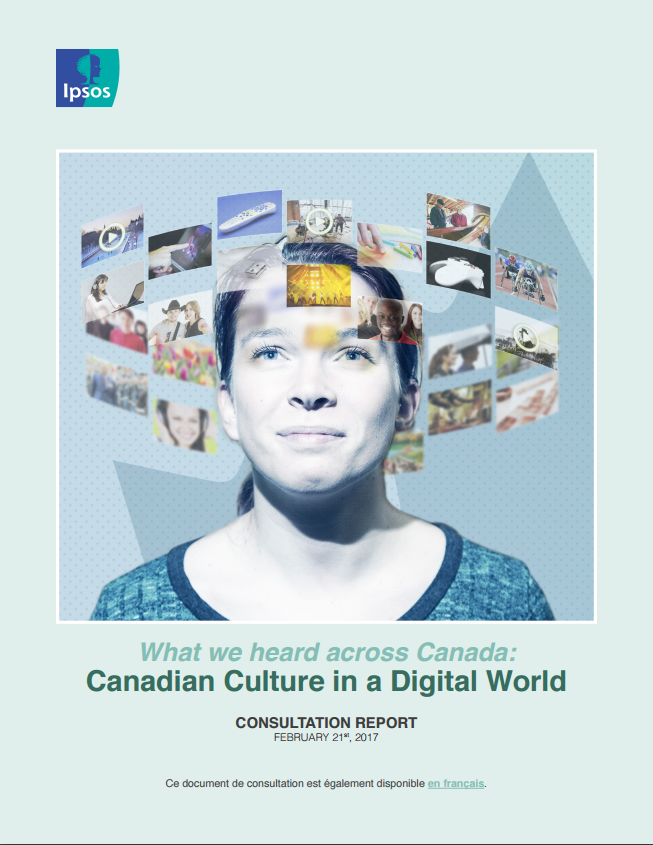 On February 21, the Department of Canadian Heritage released its Canadian Content in a Digital World consultation report. The government commissioned the independent data analysis firm Ipsos to synthesize the information gathered from the DigiCanCon consultations. The results contained in the report are described as a thematic overview of submissions received.

The television and film industries are thoroughly discussed, and while the report doesn’t contain many direct mentions of music, some sections have a strong focus on creators and the need to showcase Canada’s cultural sector at home and abroad, as well as “a need to ensure that Canadian creators share in the financial rewards resulting from increased dissemination of cultural content via digital channels.”

The report identifies three main principles that arose during the consultations, and positives for the creative community can be drawn from the feedback the government received related to each of these principles:

This principle involves supporting creators through skills development and ownership protection, investing in creators with a re-evaluated funding model to allow broader access, and respecting citizen choice to afford all Canadians with access to a diverse body of cultural content.

A sentiment expressed by many during the consultations was that “the Canadian ‘brand’ should reflect the diversity of both Canada’s cultural and ethnic populations and also Canada’s geography and landscape.” Per the report, “there was general agreement that a robust Canadian cultural offering contributes to a strong Canadian identity which in turn breeds engaged citizens.” This is how many participants felt that culture can promote a sound democracy.

How to create a cultural ecosystem that fuels growth of the middle class was one of the questions the government sought to answer. While participants reportedly had difficulty expressing how a thriving cultural sector would benefit the middle class, it’s important to remember that many members of the creative class earn an income below the poverty line from their creative work. Independent musicians earned an average of $7,228 per year from music-related activities in 2011. In many respects, a strong creative class contributes directly to a strong middle class. This is one of the main reasons the Focus On Creators coalition exists – to ask the government to put creators at the heart of future policy so they can earn a reasonable living from their work, and BE part of the middle class.

We were very encouraged by one of the “next steps” identified by the government to “through both public policy and perception, reposition the cultural sector as an engine of economic growth and innovation in Canada.” We firmly believe that music has incredible potential as a driver of economic growth and job creation and we’re committed to spreading this message.

One of the key themes of the consultations, identified on page 10, is “Modernizing Canada’s legislative framework and national cultural institutions.” According to the report, the Copyright Act was one of the institutions that participants said has “not kept pace with the shifting digital environment and should be examined.” The upcoming government-mandated Copyright Act review in 2017 was identified as a vital opportunity for Canada to stand up for creators, noting that “most agreed that changes to IP legislation that divert the flow of revenue back to the hands of the idea generators is essential to the future of the cultural ecosystem in Canada.” The Copyright Act is also included as a legislative framework in the government’s “federal cultural policy toolkit.” We hope that the opportunity presented by the 2017 Copyright Act review is used to its full potential to benefit Canada’s cultural industries.

Music Canada would like to commend Minister Joly and the Department of Canadian Heritage for undertaking such a thorough consultation at this crucial moment in time for Canada’s cultural industries. We are very encouraged by the commitment to creators displayed by both the government and participants in the consultation, and we are hopeful that these consultations will result in new policies to better support our creative industries in the digital age.