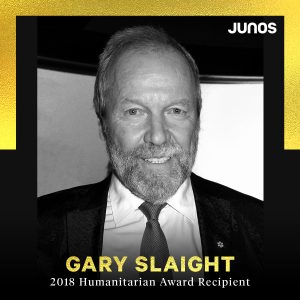 The Canadian Academy of Recording Arts and Sciences (CARAS) has announced broadcasting executive, music industry leader, and philanthropist Gary Slaight as the recipient of the 2018 Humanitarian Award. The award, formally known as the Allan Waters Humanitarian Award, recognizes an outstanding individual in the music community whose humanitarian contributions have positively enhanced the social fabric of Canada and/or whose impact can be felt worldwide.

“We are honoured to present Gary Slaight with the Humanitarian Award,” said Allan Reid, President & CEO, CARAS/The JUNO Awards and MusiCounts. “His commitment to helping others and continued selflessness places him in a category of his own. Gary’s dedication to making the world a better place is truly inspiring; from The Slaight Family Foundation’s work with charities to his support for emerging artists, and music industry organizations like MusiCounts and Unison Benevolent fund, Gary has dedicated his time and resources to providing others with the opportunity to grow. We look forward to commemorating Gary’s philanthropic work at the 2018 JUNO Awards.”

Slaight was born in Edmonton, AB, and began his career with McLaren Advertising before serving as General Manager of Toronto rock station Q107. As President of Standard Broadcasting, Gary developed a successful growth expansion strategy, which led to the sale of the company to Astral Media. With the proceeds of the sale, Gary, along with his father Allan, made the decision to fund philanthropic initiatives with the establishment of the Slaight Family Foundation and to support the Canadian music industry and emerging artists through Slaight Music.

“I am truly honoured to be this year’s recipient of the Humanitarian Award,” said Slaight. ”Our family has had a tradition of giving back to the community that transcends from my parents Allan and Ada Slaight. The Slaight Family Foundation, created as a result of the sale of Standard Broadcasting, is a tribute to my parents commitment to community and of which I am proud to lead. Whether it is supporting a local music program for children or helping to advance key health care priorities, our goal is to make a positive difference on the lives of those around us and those needing our support globally. We truly want to make an impact and help those who need it the most.”

This year’s award will be presented at the 2018 JUNO Gala Dinner & Awards Presented by SOCAN on Saturday, March 24, 2018 in Vancouver, British Columbia.