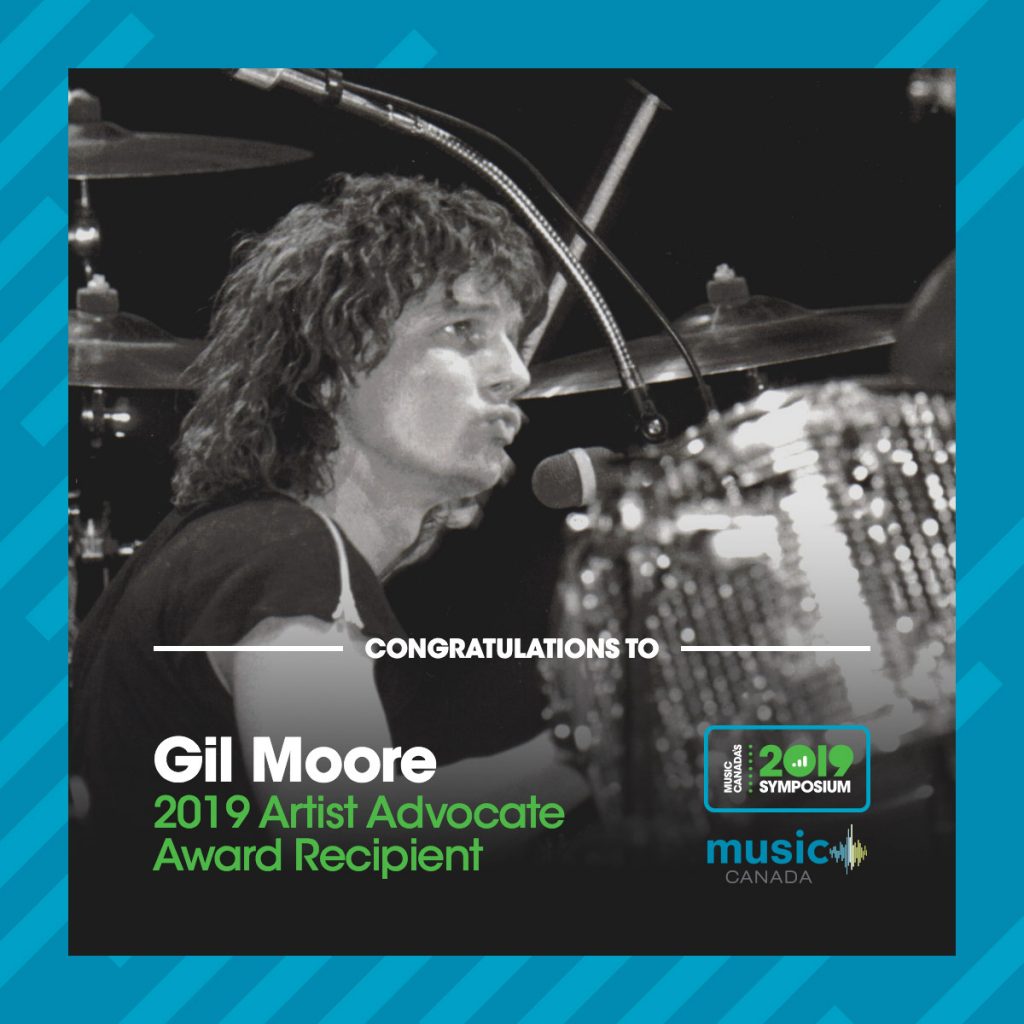 Music Canada is honoured to present Gil Moore, founding member of the multi-Platinum-certified band Triumph, and owner of the renowned Metalworks Studios in Mississauga, Ontario, as the recipient of the 2019 Artist Advocate Award. The award recognizes musicians and songwriters for their outstanding advocacy efforts to improve the livelihoods of music creators. The Mississauga-based musician has been active in the Canadian music industry for more than 40 years, with advocacy being a consistent theme throughout his career.

Moore has long been a champion for policies to help support music creators and to improve the music ecosystem. He was an active voice for copyright reform as a board member of Balanced Copyright for Canada, a coalition of content creators, artists, and rights holders, and people who work in the creative industries, which advocated for copyright legislation that effectively protects artists and creators, later passed within the Copyright Modernization Act.

Moore shared his passion for creators’ rights with his students at Metalworks Institute, and has invited Music Canada in to present town hall sessions on topics such as the Copyright Board. He also opened the warehouse of Metalworks Production Group for tours, allowing Music Canada to showcase the skilled workers and economic impact of the live music sector to policymakers in advocating for the Ontario Music Fund.

“I’m very proud to receive this award today,” says Gil Moore. “But awards are not the reason I became an artist advocate – I am an advocate for music because I have seen firsthand how it can change lives. I’ve seen that in my own career as a performer, I’ve seen it with fans who are so passionate about the artists they love, and I’ve seen it with our students at Metalworks, who get into this business and invest in their careers because they love music and they are driven to succeed in this industry. I’ve also seen the way that music can empower a community, create jobs, and drive economic growth – and that is worth advocating for. Thank you to Graham and Music Canada for this recognition, and your continued efforts to grow the music sector.”

Gil was an inaugural inductee of the Mississauga Music Walk of Fame for his personal involvement in and contributions to the community. Over the past few years, along with the other members of Triumph, Gil has been inducted into the Canadian Music Hall of Fame, Mississauga’s Legend’s Row, the Canadian Music & Broadcast Industry Hall of Fame and the City of Mississauga named a street in the band’s honour, Triumph Lane. His passion for Metalworks and the music industry is boundless; he devotes much of his time to researching trends in music education and technology.

“Gil Moore has put Mississauga’s music scene on the map. We are eternally grateful for his efforts and pride he has brought to our City,” said Mississauga Mayor Bonnie Crombie. “Gil consistently champions the power of music for job creation and growth, and as a member of our Economic Development Advisory Board, he has been instrumental in the creation of the first full-time music industry position at City Hall focused on music sector development. He possesses an encyclopedic knowledge of local music history, which he urges us all to recognize, preserve and celebrate. Because of his passion for music education and the founding of Metalworks Institute, Mississauga produces some of the world’s top musicians, sound technicians, and event experts. We are proud and lucky to have Gil in Mississauga.”

The award was presented today at Music Canada’s 2019 Symposium, taking place at the Great Hall in Toronto. Moore becomes the third recipient of the Artist Advocate Award; previous recipients include Loreena McKennitt and Miranda Mulholland.