First-ever study of live music in Ontario is released 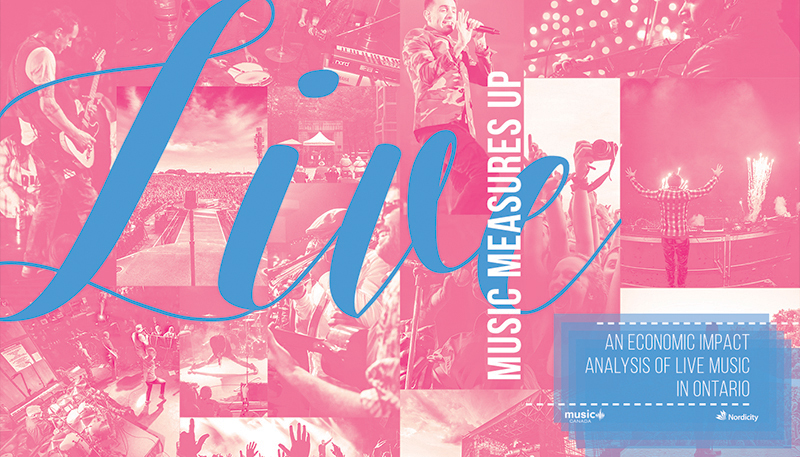 Today, Music Canada releases the first comprehensive study of the live music industry in Ontario. Live Music Measures Up: An Economic Impact Analysis of Live Music in Ontario provides critical data and information that will help guide decision-making within the sector, in government and other allied stakeholders.

“This report provides a comprehensive picture of the benefits live music brings to Ontario. In fact, it only enhances our understanding of data collected in our 2012 economic impact study, and cements what we know about Ontario as a powerhouse for the music industry. It shows that a vibrant music scene drives value in many important ways, including job creation, tourism development, brand building and artistic growth. With the new data from this study, we now have the necessary benchmarks to measure and support its growth. Live Music Measures Up allows us to look at live music through a new lens, and to better understand how critical it is to the entire music ecosystem.” says Graham Henderson, President of Music Canada.

Erin Benjamin, Executive Director of Music Canada Live, participated in today’s launch. “Measuring Live Music represents an historic, timely and monumental opportunity; one which will enable us to entrench the true value of the live music economy in the minds of our stakeholders, government and audiences alike. It’s inspiring to see the sector organize, work together and build on the momentum we can all feel – here in the Province and around the world – the kind that will help guarantee live music takes its rightful place as one of Ontario’s greatest natural resources,” says Benjamin.

Prior to this study, there existed no comprehensive data set on Ontario’s live music industry. Music Canada engaged Nordicity to complete the profile, which they did after conducting interviews and surveys of artist managers, promoters, agents, music venues, and festivals in the province. The study was completed in partnership with Ontario’s Ministry of Tourism, Culture and Sport, and with the financial support of the Ontario Media Development Corporation through the Ontario Music Fund.

In 2012, Music Canada studied the economic impact of the sound recording industry in Canada utilizing 2010 Statistics Canada data. The new data collected for Live Music Measures Up provides a more fulsome and detailed look at the live music sector in Ontario. A more comprehensive data set is necessary to understanding where the live music sector is, has been, and will be in the future. This report will provide necessary benchmarks to understand and support the sector’s future growth.

The economic profile is organized into four key areas: revenue, audience, economic impact, and future outlook. The key takeaways are as follows:

“Live music is a powerful force, and we thank Music Canada for their leadership in helping to quantify the extraordinary work of the sector,” adds Benjamin.