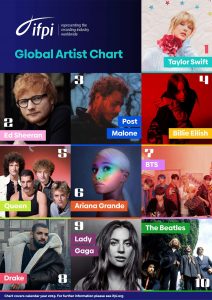 IFPI, the organization representing the recorded music industry worldwide, announced their Top 10 Global Recording Artist Chart yesterday. Taylor Swift has been recognized with the IFPI Global Recording Artist of the Year Award, as the world’s best-selling recording artist of 2019. The Award and the Top 10 chart is the only ranking to accurately measure music consumption across all formats (including streaming channels, digital and physical album and singles sales), and across all countries. It is weighted based on the relative value of each method of consumption.

Swift released her seventh studio album, Lover, in August 2019, which debuted at number one in more than 10 countries, including Canada. The album reached three million album-equivalent sales worldwide by the end of its first week of release.

“Taylor Swift is the epitome of a truly global star,” said Frances Moore, chief executive of IFPI. “She continues to grow as an artist and maintains an incredibly strong connection with her fanbase, whilst continuing to evolve her sound with each album. It is a pleasure to be able to present her with the Global Recording Artist of the Year award for the second time.”

Swift was previously recognized with the Award in 2014. She joins Drake as the only two artists to earn the recognition multiple times. The Canadian rapper topped the chart in 2016 and 2018. Drake placed 8th on this year’s chart, marking five consecutive years that he has been in the Top 10.

“The ‘top ten’ showcases some of the brightest and most talented artists from around the world, from newer stars, such as Billie Eilish and BTS, to legacy acts like The Beatles and Queen,” added Moore. “This range demonstrates how people’s love of music can be continually ignited by new and diverse artists and yet endures across decades. I congratulate all the artists in the chart.”