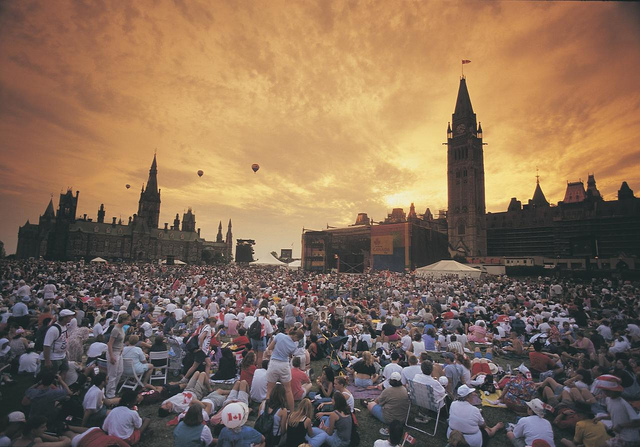 Happy Canada Day! From coast to coast, we’ve compiled a list of some of the biggest free Canada Day concerts suitable for the whole family. Regardless of where you’re celebrating, don’t forget to bring water, a hat and sunscreen.OTTAWA, ONThousands will join together on Parliament Hill to mark Canada’s 147th birthday. This year’s show will feature performances from national favourites like Serena Ryder, Marianas Trench, Whitehorse, French pop sensations Nadja and Daniel Lavoie, singer/impersonator Véronic DiCaire and Brett Kissel, who played the Minister’s Music Night in Ottawa 2013.Canada Day in the Capital will be televised on CBC at 9 PM ET. The concert will be broadcast in its entirety live on CBC Radio 2 with host Tom Power (Radio 2 Morning) beginning at 8 PM ET. CBCMusic.ca/CanadaDay will also stream the concert live starting at 8 PM ET.Canada Day in the Capital will highlight the 100th anniversary of the beginning of the First World War, the 75th anniversary of the beginning of the Second World War, the end of the mission in Afghanistan and the 150th anniversary of the Charlottetown and Québec Conferences, as well as our Canadian Olympic and Paralympic athletes.CHARLOTTETOWN, PEIBarenaked Ladies, Tegan & Sara will headline a jam-packed day of family-friendly activities at the new Charlottetown Event Grounds. All 10,000 advance free access passes for the PEI 2014 Canada Day Concert have been reserved, but an additional 5,000 free passes will be available on a first-come first-served basis Tuesday at the entrance gates.ST. JOHNS, NLFrom Noon to 6 PM, George St will host a family-friendly Rock & Soul Party, with face painting and balloon making for the kids. The schedule for music is Clean Sheets 1 PM, Chris Kirby & the Marquee AND Billy and the Bruisers 2pm, and The Rogues at 4pm.HALIFAX, NSSam Roberts Band will headline a free annual concert at Alderney Landing with July Talk, The Belle Game and local favourite Ben Caplan & The Casual Smokers. The day of activities begins with pancake breakfasts at Grand Parade and Alderney Landing, and the singing of the national anthem from Citadel Hill. There will also be a Tattoo Parade through downtown Halifax, the Maple Lodge Farms Family Fun-Fest on the Halifax Common, and a fireworks show on the harbour at 10 PM.MONTREAL, QCBring your family down to Montreal’s Old Port for activity tents, an inflatable village and ceremonial 21-cannon salute. There will also be a concert beginning at 8:30 PM featuring Pascale Picard, Luca “Lazylegz” Patuelli and many more.TORONTO, ONBeginning at 5 PM, Mel Lastman Square in North York will host a fun-filled evening of live music and performances. Toronto alt-country singer/songwriter Justin Rutledge will take to the stage at 8 PM to play his Juno award winning catalogue and pay tribute to Canadian legends The Tragically Hip, playing songs off his latest cover album Daredevil. At 9 PM, roots rockers NQ Arbuckle will be performing music from their latest release The Future Happens Anyway with special guests.WINNIPEG, MBTaking Place at The Forks, Winnipeg will have a free Canada Day event featuring 3 stages of Manitoba artists beginning at 1 PM. There are also tons of free activities for the whole family including a museum, obstacle courses and a photo booth.CALGARY, ABLabelled “Canadayyc”, Calgary will host a huge all-ages Canada Day bash including live music from Mother Mother and Michael Bernard Fitzgerald on Riverfront stage, First Nations Powwow on Prince’s Island, Living Flag activity, Food Truck Roundup and BassBus at Festival Market, and an amazing Fireworks display presented by Hudson’s Bay. Download the app to make sure you catch everything!REGINA, SKDue to significant rainfall in the month of June, the city of Regina decided to scale back the festivities this year, which unfortunately meant cancelling headliners Big Sugar and Wide Mouth Mason. However, the show will go on, featuring DJ The Beat Attic with Shawn Jobin. An official statement from the Regina Canada Day Committee (RCDC) can be read here.SURREY, BCBritish Columbia’s largest Canada Day party will be taking place in Surrey with a free all-ages event headlined by Matthew Good. Highlights of the event include a half a million square feet of site area, an expanded Kids Play area, over 100 exhibitors, shooting Star Amusements with superior midway games and rides, and a spectacular fireworks for the grand finale. Gates open at 10 AM and music will be going on all day.