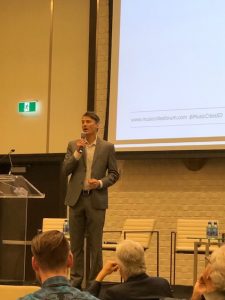 Vancouver’s Mayor, Gregor Robertson, announced this morning at the JUNO Host Committee’s Music Cities Forum that the Vancouver Music Strategy will be presented to council in summer of 2018. The strategy has been in development since mid-2016, led by the Vancouver Music City Steering Committee with input from an Advisory Committee.

“There’s no doubt we have enormous potential in music and sound, particularly given the scale of our creative industries,” Robertson told the Music Cities Forum crowd.

In a City of Vancouver release, Robertson expanded on the Strategy’s goals: “Vancouver is home to a growing number of world-class artists who are building a vibrant and diverse music scene in our city. The Vancouver Music Strategy will help our artists to thrive—not just survive—by boosting our creative economy and seizing opportunities to grow our local music industry.”

The Strategy will be informed by two concurrent studies that received support from the BC Music Fund’s Research Program: Music BC’s City of Vancouver Music Ecosystem study, also funded by FACTOR and conducted by Sound Diplomacy, and Music Canada Live’s Economic Impact Assessment of Live Music in BC, facilitated by Nordicity. Both studies are expected to be completed in spring of 2018.

“This is a pivotal time for the City of Vancouver and British Columbia as we look to safeguard the long-term viability of the music sector within the creative economy. Music BC and the [Vancouver] Music City Steering Committee are committed to ensuring that these findings are used to reach our common goals of a vibrant and sustainable industry that will allow our artists and music industry professionals to thrive on the global stage,” said Alex Grigg, Executive Director of Music BC and Co-chair of the Vancouver Music City Steering Committee, in the City release. “This will be a benchmark for Music BC to work with other cities and municipalities across the province to implement like-minded strategies.  Music BC would like to thank the City of Vancouver, the Province of BC, FACTOR and all of our stakeholders for your continued support.”

It is a thrilling day for music in Vancouver and the province of British Columbia, as the Government of BC also announced a new music fund this morning called AMPLIFY BC. The excitement over the two announcements was palpable at the Music Cites Forum.