IFPI releases ‘Music Listening 2019’ report, providing a comprehensive look at rising music engagement in Canada and around the globe

Today, IFPI, the organization representing recorded music worldwide, released Music Listening 2019, a comprehensive overview of music consumption trends from around the world. The report examines the ways in which music consumers aged 16 – 64 engage with recorded music across 21 countries.

The report illustrates the growth of music listening around the world. Globally, music listening is up, with respondents typically spending 18 hours per week listening to music, up from 17.8 hours in 2018. This equates to approximately 2.6 hours per day, the equivalent of listening to 52 three-minute songs per day. 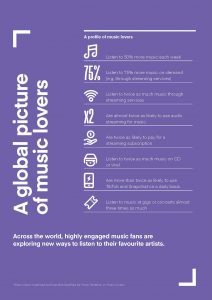 This global surge in music listening is driven by fans’ love of music – more than 54% of respondents say they “love” or are “fanatical” about music. Canadians are among the world leaders in terms of passion for music – 59% of Canadians say they are music lovers or music fanatics, which is above the global average and the fourth-highest in the world.

“This year’s report tells an exciting story of how fans are increasingly engaging with music,” said Frances Moore, chief executive of IFPI. “At a time when multiple forms of media vie for fans’ attention, they are not only choosing to spend more of their time listening to – and engaging with – music but they are doing so in increasingly diverse ways.”

The report presents a profile of music lovers, who listen to more music per week, and to listen on a greater variety of services and platforms.

Overall, 89% of respondents listen to music using an on-demand streaming service. The biggest reasons consumers enjoy these services include access to large catalogues of music, and the convenience of listening.

“The report also highlights that the availability of music through unlicensed methods, or copyright infringement, remains a real threat to the music ecosystem,” continued Moore. “Practices such as stream ripping are still prevalent and return nothing to those who create and invest in music. We continue to coordinate world-wide action to address this.” 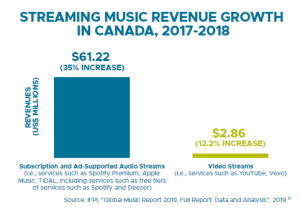 Source: Closing the Value Gap: How to Fix Safe Harbours and Save the Creative Middle Class, Music Canada, 2019

This trend is concerning, as user-upload services like YouTube pay significantly lower royalty rates compared with other music streaming services.  This has a significant impact on artists’ and other rights holders’ incomes: plays on Spotify or Apple Music put dramatically more money in their pockets than the same number of plays on YouTube. The average annual revenue to rights holders per user is estimated by IFPI at under US$1 on YouTube, while on Spotify the comparative figure is US$20.

Source: Closing the Value Gap: How to Fix Safe Harbours and Save the Creative Middle Class, Music Canada, 2019

The biggest cause of this discrepancy in royalty rates are provisions in Canada’s Copyright Act known as “safe harbours” that ad-supported user-upload services like YouTube claim as shelter from liability of responsibility for illegal activity. As examined in our recent report, Closing the Value Gap: How to Fix Safe Harbours and Save the Creative Middle Class, the prevalence of services such as YouTube depresses not only consumer demand for paid subscription services (that better compensate artists and other rights holders by orders of magnitude) but also royalties paid by those services. These effects are the result of substitution possibilities, such as when a service like YouTube, which profits enormously through the subsidy enabled by overly broad safe harbours, provides a free alternative to paid services.

This is why Music Canada supports the recommendations of the Standing Committee on Canadian Heritage’s ground-breaking Shifting Paradigms report, which recommends to the government a series of actions that would help artists and the creative industries. The report tackles numerous weaknesses in Canada’s Copyright Act, identifying elements which have failed to keep pace with technology and the digital marketplace for music. Among its key recommendations which will bolster a functioning marketplace for creative works, the report recommends addressing Canada’s broad safe harbour laws, eliminating or narrowing exemptions from the Act that prevent creators from being fairly compensated, combating modern forms of piracy (like stream ripping) and strengthening the enforcement of Canada’s copyright laws.

To clarify some questions from the community, @UnisonFund has posted a blog regarding Unison’s financial assistance program, and how it relates to support offered by the federal government
https://unisonfund.ca/blog/post/applying-unisons-financial-assistance

Miranda Mulholland, artist and Chair of the Music Canada Advisory Council, has commissioned a new video that illustrates how fans can support the artists they love: https://www.facebook.com/MirandaMulholland/videos/242697453723975/

Music has been a source of comfort and discovery for Canadians during the pandemic. Consumption is up and 78% say it is a way to relieve stress.

More on the deep dive and look at the impact of the pandemic on live music.