At Standing Committee on Canadian Heritage, Miranda Mulholland illustrates why urgent action to address the Value Gap is needed

Last Thursday, musician, label owner and music festival founder Miranda Mulholland appeared before the Standing Committee on Canadian Heritage’s study of remuneration models for artists and creative industries, where she shared her personal experience as an artist living in the Value Gap.

She began by making Committee members aware that although they may not recognize her, they had most certainly heard her play. “Over the last 19 years, I have played or sung on hundreds of recorded songs on over 50 records including many JUNO Award nominated or winning albums,” she said. “I have done film and television work – you can hear my fiddle playing on every episode of Republic of Doyle and in the film Maudie and on the Good Things Grow in Ontario jingle.”

Mulholland then stated that creators are storytellers and that the story she would tell them today had a beginning, a middle and that she hoped that she and the Committee members would write the end together.

.@miramulholland’s story beings in university. “I went to Carden Street Music in Guelph and bought a Natalie MacMaster CD for 15.99 and learned every tune on that record. From there I went on to a career in music based on fiddle playing…And then EVERYTHING changed.”

After outlining how she got her start in music, becoming a fiddle player as the digital revolution took off, Mulholland spoke about the Value Gap, and what it has meant to her career.

Mulholland then referenced previous testimonies that the Committee has heard, from artists like Andrew Morrison of the JUNO-nominated group The Jerry Cans, and Music Canada President and CEO Graham Henderson, who both spoke of the disappearance of middle class artists.
Mulholland underscored this point, stating: “The musician middle class is gone – and even the ladder to get there is gone.”

In the middle of her dynamic and authentic presentation, Mulholland proposed four immediately actionable solutions that Committee members could recommend to help improve the framework, which are captured in the video embedded below.

In addition to sharing her perspective as an artist, @MiraMulholland presented action-based solutions that Parliamentarians can take to address the Value Gap: pic.twitter.com/nahBuloThV

Approaching the end of her story, Mulholland expressed hope that the Committee would help write the ending. Referencing the recent actions that lawmakers in Europe and the United States have taken to help close the Value Gap, Mulholland expressed hope that the Heritage and Industry Committees can work with artists like herself to fix the broken framework and update the laws to reflect artists’ day to day lives.

Her testimony was encapsulated by one of her closing remarks: “Artists have adapted and we need our laws to do the same.”

“Wow, thank you for your excellent presentations. It’s really from the heart, and I would say that you are excellent at explaining the issues – so if there is anyone who had a hard time understanding the scope of the challenge that you’ve been living through, well, now they understand it. Thank you for your testimony – it was exceptional. These are very sensible recommendations in my opinion, and they could be implemented very quickly.”

During the question and answer portion of the hearing, Breton asked Mulholland which of the recommendations she offered could have a quick impact if enacted by government. Mulholland replied:

“Each one would have an immediate effect. The first one, the radio royalty exemption, getting rid of that subsidy – and again, subsidizing – artists are subsidizing the big media conglomerates – that needs to stop. And if that ended, that money would be filtered through into artists pockets immediately.

Same with sound recording … I just played with Alan Doyle on a new kids show that he’s writing the music for… if this was enacted and the sound recording wording was changed, as soon as that is played, I will get paid for my work – so that would help me immediately.

The private copying – that would help immediately as well.

And having a term extension would help me value my work for longer, so I would be able to leverage that if I was talking to a publisher or a label about my catalog. So all four would help me right now.”

“In many interviews you’ve done, I noticed that you’re talking about how the Copyright Act is not protecting creators and artists – what concrete changes would you like to see to the Copyright Act so that we can have more fairness and money can be distributed from the distributors to the creators?”

Mulholland replied that right now, she and her creator colleagues are subsidizing billionaires. She told Dhilllon, “the subsidies need to stop – so that would be the radio royalty exemption… it was supposed to be temporary, and it needs to be removed… We just want to have a functioning marketplace.”

Following the hearing, Committee members enthusiastically thanked and congratulated Mulholland for her concise and moving testimony. 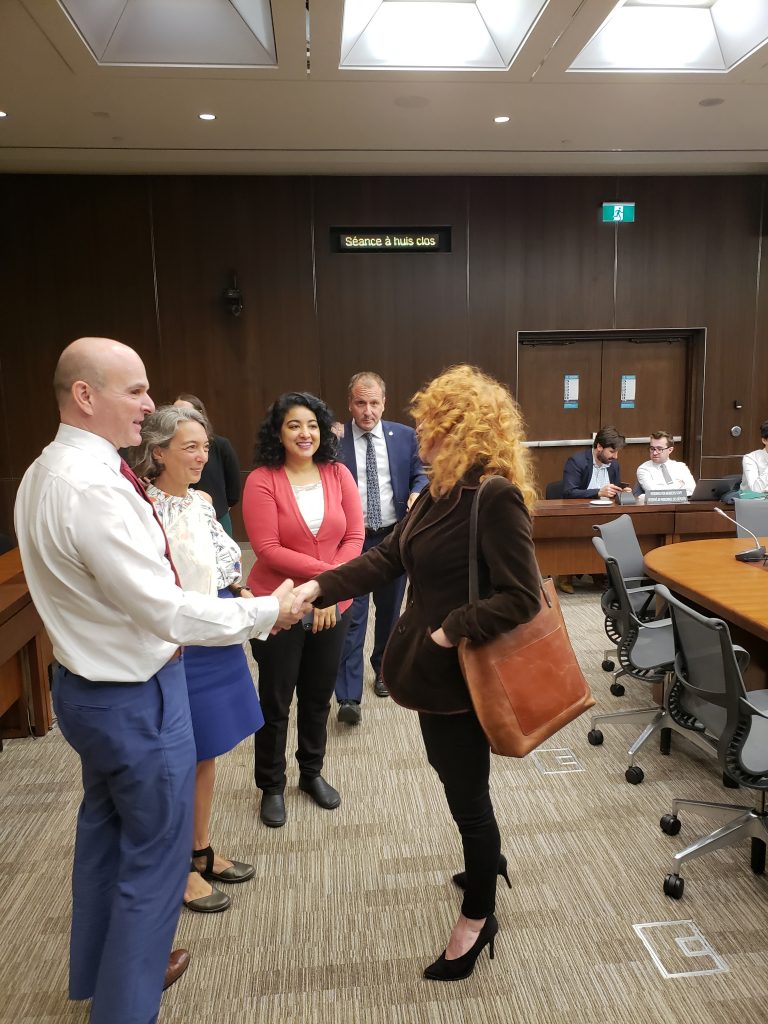 Thank you to @miramulholland for coming to Heritage Committee and sharing your experience and insights. Great to hear from our artists about the industry and copyright. pic.twitter.com/Fe2hscAMtE

Full video of the September 20, 2018, Standing Committee on Canadian Heritage hearing is available on the House of Commons website.