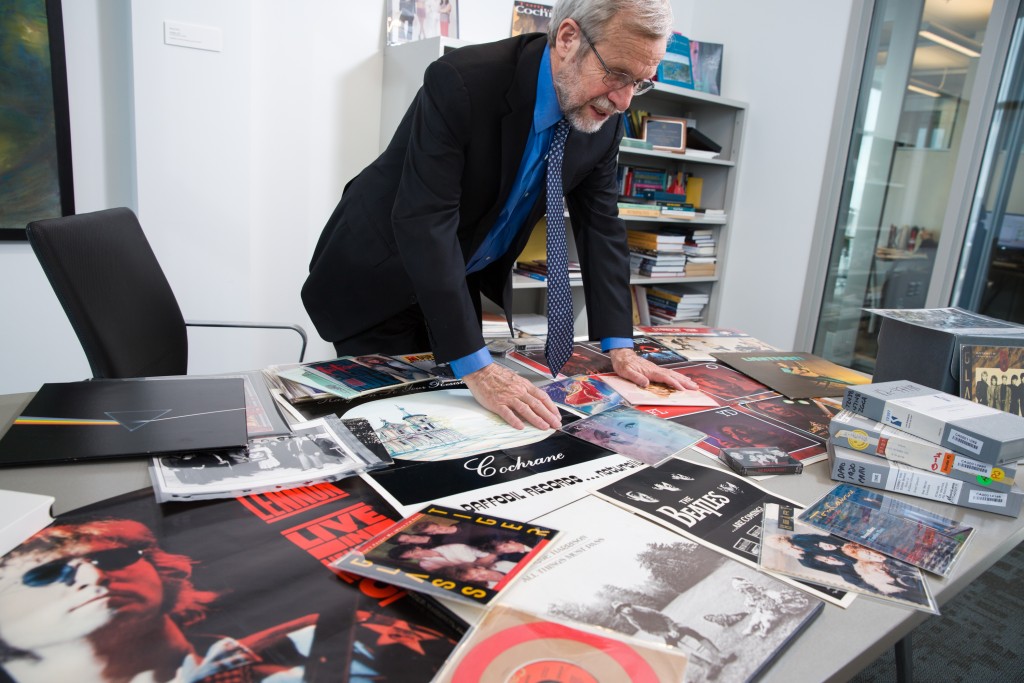 Tom Hickerson, vice-provost (Libraries and Cultural Resources) at the University of Calgary

As the city prepares for this weekend’s JUNO Awards festivities, the University of Calgary revealed today that Universal Music Canada (UMC) has donated EMI Music Canada’s complete archives to the university’s Libraries and Cultural Resources, which were acquired by the label in 2012 when Universal Music Group purchased EMI Music.

The University of Calgary has also partnered with the National Music Centre, which played a leading role in bringing the EMI archive to Calgary by connecting UMC with the university. The partnership will allow for collaboration on opportunities for the public to celebrate music in Canada through educational programming and exhibitions that highlight the archive.

“Plans for an educational component around music and the ambitions for this archive are tremendously exciting,” said Jeffrey Remedios, President and CEO of UMC, who spoke at Thursday’s announcement along with Deane Cameron, former President and CEO of EMI Music Canada, and celebrated Canadian artist Tom Cochrane. “EMI Music Canada became the source of the music many Canadians grew up listening to. It’s such a rich and treasured history and it’s terrific that generations to come will have the opportunity to explore that.”

CEO @universalmusicC Jeffrey Remedios at announcement of donation of EMI archive from 1949-2012 to @UCalgary. #YYC pic.twitter.com/BAkhGUamhf

In addition to the gift of the EMI Music Canada Archive, Universal Music Canada will provide substantial funding over several years to support the preservation and management of the collection.

“We are eager to work with Universal Music Canada and the University of Calgary to explore programming and exhibition opportunities that bring the wealth of this collection to Canadians,” said Andrew Mosker, President and CEO for the National Music Centre. “From our burgeoning music scene, the opening of Studio Bell this summer and this incredible archive, it is safe to say that Calgary is becoming a serious music city.”

Visit the University of Calgary’s website for more information on the archive acquisition and view the video below for a sample of what the collection has to offer.

Toronto, July 7, 2011: Effective immediately, the Canadian Recording Industry Association (CRIA) will be known as Music Canada.
Music Canada is a non-profit trade organization that represents Canada’s major labels. Music Canada promotes the interests of its members as well as their partners, the artists. Those members are EMI Music Canada, Sony Music Entertainment Canada Inc., Universal Music Canada Inc. and Warner Music Canada Co. In addition, Music Canada offers specific benefits to some of the leading independent labels and distributors in Canada.
Music Canada will support its members’ efforts to rebuild the marketplace for recorded music.
The first major effort of Music Canada is the launch of a music portal designed to become a comprehensive resource for the music industry.
musiccanada.com provides information and resources to those within the industry, as well as our partners in government, media, and business. Consumers will also find valuable information guiding them towards effective and legal ways to access and use music.
One of the most exciting resources is a 35 year archive of Gold/Platinum Awards in Canada. Our Gold/Platinum Awards Program was launched in 1975 to celebrate milestone sales of music in Canada. The online archive allows all those who love music to explore the historical timeline of popular records.
— 30 —
For more information: Amy Terrill
647-963-6044