On Tuesday, October 16, Music Canada hosted Playback 2018, our annual industry dialogue and celebration. The event featured an  annual review from Music Canada Executive Vice President Amy Terrill, a panel discussion on how to help music creators living in the Value Gap, followed by a ‘fireside’ chat with Cary Sherman, the Chairman and CEO of the Recording Industry Association of America (RIAA).

One of the highlights of the event was the keynote address delivered by Debora Spar, who first spoke at Music Canada’s Global Forum event ten years ago about her book Ruling the Waves: From the Compass to the Internet, a History of Business and Politics along the Technological Frontier.

In her remarks at Playback 2018, Spar took a look back at how predictive her groundbreaking 2001 book was – particularly when applied to the evolution of the recorded music industry. The central theme of the speech was a reflection on what progress has been made in applying rules to the wave of commerce and chaos that the internet has brought.

“My thesis was that the Internet – despite all the hoopla surrounding it; despite the vast fortunes already being made and the even greater fortunes being foretold – was part of a long chain of communications technologies that began with the printing press; and a technology whose development needed to be seen as part of this broader historical evolution… I argued that the Internet, like the printing press and the telegraph and the radio, was destined to go through four major stages of political and commercial evolution.”

After outlining each of the four phases (innovation, commercialization, creative anarchy, rule-making), Spar drew a parallel to the evolution of the music industry, with the ‘innovation’ stage occurring in the 1980’s and early 1990’s.

Spar went on to trace how the major developments of the music industry corresponded to the four phases described in her 2001 book – pointing to government initiatives like Canada’s ongoing Copyright Act Review as evidence we are in the final ‘rule-making’ stage.

To watch Debora Spar’s full remarks below, check out the video below.

To view more moments from Playback 2018, a photo gallery can be found on Music Canada’s Facebook page. 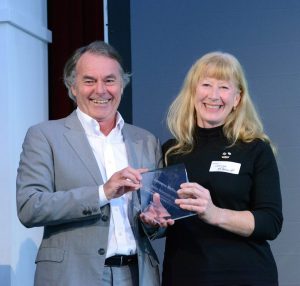 The Artist Advocate Award was introduced at Playback 2017. Now in its second year, the award recognizes musicians and songwriters for their outstanding advocacy efforts to improve the livelihoods of music creators.

“Loreena, as everyone in this room knows, is an internationally successful artist entrepreneur.  She founded her record label Quinlan Road in 1985, and since then, her music has received critical acclaim worldwide with sales of 14 million records globally.

Throughout her illustrious career, and from the day she chose to retain her master rights, and do it her own way, she has been a passionate, devoted advocate for musicians’ rights.

Her testimonies and submissions to parliamentary hearings have, over the years, demonstrated her deep business and political acumen, and has influenced real change making her a force to be reckoned with.

She is also a dedicated human rights advocate, a generous philanthropist, she established the Cook-Rees Memorial Fund in 1998.

I had the privilege of working for Loreena for almost 10 years and we have remained friends ever since. So in recognition of her unwavering public support for the rights of music creators, we are proud to present Loreena McKennitt with our 2018 Music Canada Artist Advocate Award.”

McKennitt graciously accepted the award, remarking on her career path and the impact that music has had on people across the globe. In her acceptance speech, she stated: 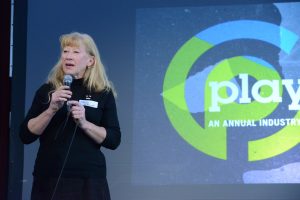 “Well, thank you very much Graham for this, as well as Music Canada. It is unexpected but also, I feel there are others who are equally, if not more, deserving.

It is true that my career path began in earnest around 1990 and it was at that time that I found Graham and he helped mastermind what became to some, a famous Warner deal. And he was an educator for me and an advocate as well as someone who really showed me a lot of the path forward.

I grew up in Southern Manitoba in a German Mennonite community and music was central to our lives. Not so much in a professional sense, but in terms of a living, breathing medium that means so much to us as a species. The fact that I set out to be a veterinarian and ended up in the music industry certainly speaks to the fact that you can set out on a journey and not know where you will end up.

But it is my sincere hope that through gatherings, such as today, and the minds of people who are really leaning against the wheel, that we can change for the better. All those who enjoy music are enriched by it, healed by it, entertained by it. And to protect that realm of music in their lives, we have as an industry, it’s not all about us, it’s all about other people and people we sometimes call the consumer. But when I meet them I hear people who have been genuinely changed through the medium of music.

So, I thank you all once again for being here this afternoon and thank you very much for this recognition. I will continue to be whatever support I can until I hang up my shoes. Thank you.”

Video of the award presentation and McKennitt’s acceptance speech is embedded below. 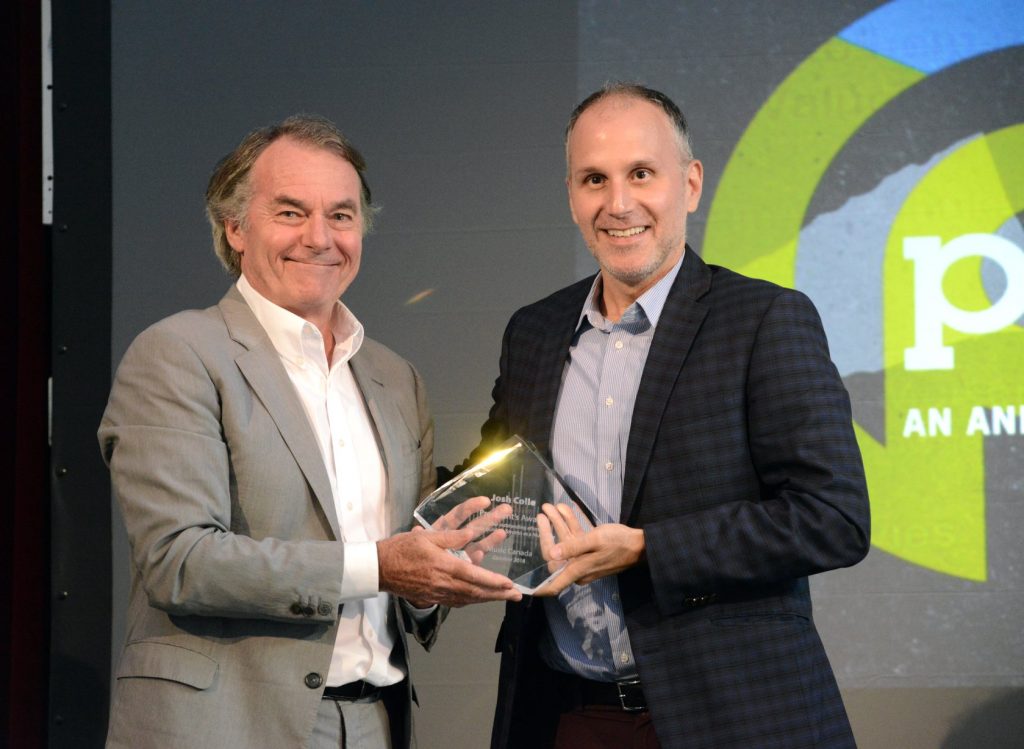 The Music Canada President’s Award is presented to an individual outside of the music community who exhibits a deep passion for music and the people who make it, and who has had a considerable impact on the music industry.

Colle has exemplified those qualities in his role as City Councillor for Ward 15. Since being elected in 2010, Colle has been known as “the music guy” on Council – first unofficially, as a frequent concertgoer, and then officially, in his role as Co-Chair of the Toronto Music Advisory Council (TMAC).

Colle “has been the most stalwart champion of our industry at City Hall,” said Henderson, noting that Colle formed the first task force for music at City Hall, which later evolved into TMAC.

“In his ward, Josh has tirelessly advocated for increased arts and music programming, connected youth with music grant opportunities and industry mentors, and spearheaded efforts to celebrate Toronto’s reggae music history with the creation of Reggae Lane,” continued Henderson. “It is my absolute honour to present the 2018 Music Canada President’s Award to Josh Colle.” 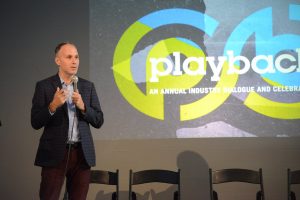 “As a lifelong fan and supporter or Toronto’s amazing music scene I am honoured to be recognized by Music Canada,” said Colle. “We have made so much progress, have so much to be proud of, and I look forward to continuing to support music in Toronto.”

Through his passion for music, Colle has helped change the way that City Hall views Toronto’s music scene. Where it was once an afterthought in terms of planning and policies, today departments like Municipal Licensing, City Planning, Public Library, Emergency Services, Toronto Parks and more have consulted the industry and consider its needs as they conduct their work.

Colle was an early champion of the City of Toronto Music Office, the Toronto Music Strategy, the Toronto/Austin Music City Alliance, and provided crucial leadership on the protection of live music venues. Recognizing that rapid gentrification and development in Toronto could threaten the city’s live music venues, Colle presented a motion to help protect Toronto’s existing venues, and foster an environment to help new venues become established.

One of Colle’s proudest achievements as Councillor was the establishment of Reggae Lane, which recognizes the rich music heritage of Eglinton Avenue West. After helping rename the roadway near Eglinton Avenue and Oakwoods Avenue, Colle commissioned the largest reggae-themed mural anywhere in Canada to pay tribute to the musical icons that made the area the second-largest hub for reggae music after Kingston, Jamaica. The 1,200 square foot mural, painted by local artist Adrian Hayles, depicts artists Pluggy Satchmo, Bernie Pitters, Leroy Sibbles, Lord Tanamo, Jay Douglas, and more.

Watch the video below as Councillor Colle accepts the award, presented by Music Canada’s President and CEO, Graham Henderson.

Playback 2018: Fireside Chat with Cary Sherman, CEO and Chairman of the RIAA

On Tuesday, October 16, Music Canada hosted Playback 2018, our annual industry dialogue and celebration. The event began with an annual review from Music Canada Executive Vice President Amy Terrill, followed by a keynote address from professor and author Debora Spar, and a subsequent panel discussion on how to help music creators living in the Value Gap.

The final program of the afternoon was a ‘fireside’ chat with Cary Sherman, the Chairman and CEO of the Recording Industry Association of America (RIAA).

Moderated by brilliant artist advocate and musician Miranda Mulholland, the conversation centered on Sherman’s long career as an industry titan and passionate supporter of the rights of music creators.

The discussion began with a deep-dive into the recently passed Music Modernization Act (MMA) in the US, and an outline of Sherman’s role in the evolution of this historic legislation. The MMA contains several important new components, but some of the key achievements include:

In addition to outlining the key policy components of the MMA, Sherman also touched on how rewarding it was to see the strong support and recognition of the value of this legislation that existed on both sides of the aisle. As he described, the consensus that formed between different aspects of the industry became a powerful force that ultimately helped present a united coalition.

To watch more of the conversation, check out the video below. 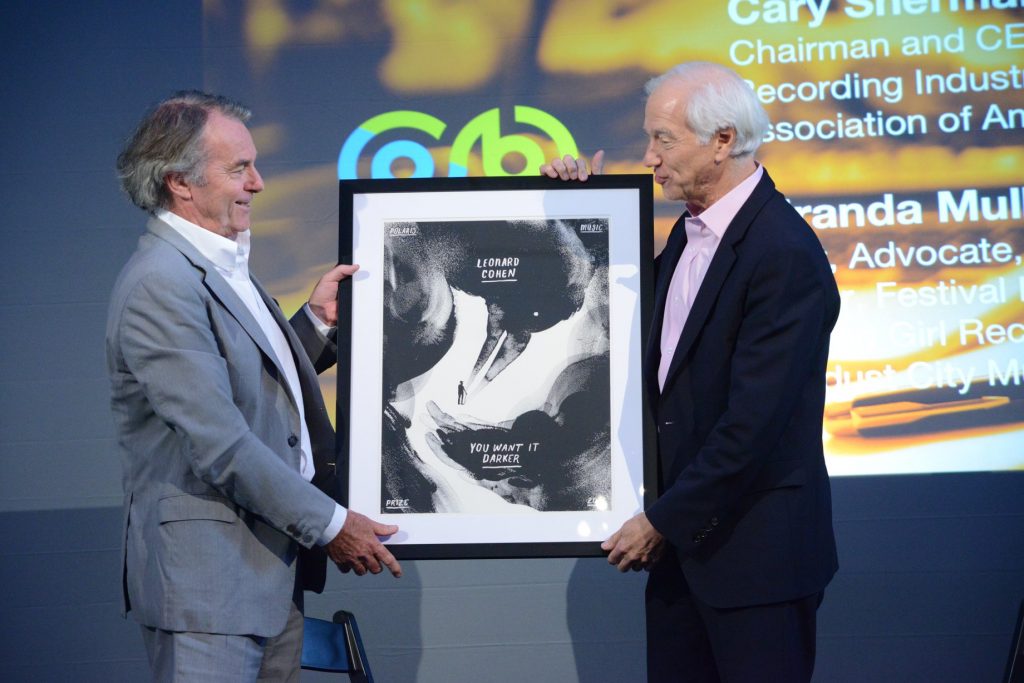 A full Playback 2018 photo gallery can be viewed on Music Canada’s Facebook page.