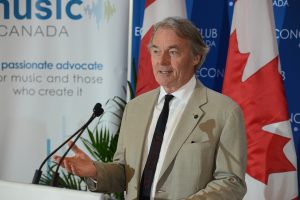 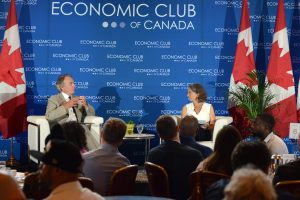 June 26, 2019, Toronto: In a new report, Music Canada is calling for the Government of Canada to rebalance the music marketplace and restore fairness to the creators of music. The report, titled Closing the Value Gap: How to Fix Safe Harbours and Save the Creative Middle Class, was released by Music Canada President and CEO Graham Henderson today at a sold-out address before the Economic Club of Canada.

The report builds on Music Canada’s previous findings from the 2017 report, The Value Gap: Its Origins, Impacts and a Made-in-Canada Approach, which first identified the existence of a gap in value of creative content and the revenues returned to the artists who create it. A broken copyright framework, ill-adapted to the challenges of the digital age, is now generally recognized as the cause of the Value Gap.

“The origins of the Value Gap can be found more than 20 years ago. It was the dawning of the digital marketplace, and countries around the world struggled to reinterpret copyright laws that were designed for an analog age,” says Graham Henderson, President and CEO of Music Canada. “They wanted to protect creators, but they also wanted to give a boost to young technological start-ups. Inevitably, perhaps understandably, mistakes were made.”

New economic evidence confirms that the Value Gap in Canada continues to grow, with staggering figures that show the discrepancy between what artists make and what they create:

Supported by the data and the experiences of hardships that musicians currently face, Music Canada joins Parliament’s Heritage Committee in proposing solutions to improve Canada’s copyright framework to better ensure that creators are paid when their work is commercialized by others. From clarifying safe harbours, to addressing the responsibilities of user-upload services, to eliminating the commercial radio royalty exemption and clarifying the definition of “sound recordings”, to creating a temporary fund for private copying, these recommendations would ensure fair compensation for artists and reduce the Value Gap.

“Canadian artists deserve a sustainable and working marketplace for their work,” says artist and record label owner Miranda Mulholland, who also serves as Chair of Music Canada’s Advisory Council. “Artists have been speaking up about the need to close the Value Gap, and our industry speaks in a unified voice on this issue. We need to end broad safe harbours and stop subsidizing billionaires who are commercializing the work of others without fair compensation. This report lays out the steps to fix our broken copyright framework and restore fairness to the creators of music.”

“Closing the Value Gap definitively sets out the economic evidence surrounding the size and growth of the Value Gap and provides clear, achievable recommendations to fix it,” Henderson adds. “The report draws focus to the main cause of the Value Gap in Canada: broad safe harbour laws in the Copyright Act. Two Parliamentary Committees in Canada have recommended reviewing Canada’s safe harbour laws. Now is the time to rebalance the ledger and restore fairness to the marketplace for creators.”