Released today, IFPI's Music Consumer Insight Report tells the story of how recorded music is woven into the lives of people around the world. Download it now – https://t.co/5ymX70VLNM #MusicInsight2018 pic.twitter.com/cADLAkublS

“This year’s Music Consumer Insight Report tells the story of how recorded music is woven into the lives of fans around the world.  As it becomes increasingly accessible, it continues to be embraced across formats, genres and technologies,” said IFPI Chief Executive Frances Moore in a release. “Record companies are working with their partners to sustain and develop these rich and diverse ways in which music is being enjoyed, ensuring that it continues on its exciting journey around the world.”

One of the key highlights from the report is the ubiquity of on-demand streaming. 86% of consumers globally are listening to music through an audio or video on-demand service. 56% of listeners in Canada engage with music through on-demand audio services, just slightly below the global average of 61%.

86% of consumers globally are listening to music via on-demand streaming and three quarters of consumers use smartphones to listen to music. More key findings about how people are accessing music in IFPI’s Music Consumer Insight Report https://t.co/5ymX70VLNM #MusicInsight2018 pic.twitter.com/cRnCx5mF7X

Within this high usage of on-demand streaming though, it is user-upload services that continue to dominate consumption. The report notes that globally, 47% of time spent listening to on-demand music is on YouTube, compared to 28% on paid audio streaming services and 20% on free audio streaming.

“However, this report also shows the challenges the music community continues to face – both in the form of the evolving threat of digital copyright infringement as well as in the failure to achieve fair compensation from some user-upload services,” said Moore. “Policymakers around the globe have been scrutinising these issues and increasingly acting to address them.”

Recent votes in the United States Senate and European Parliament have added even more urgency for Canadian policymakers to take similar action. Music Canada remains committed to working with the federal government to address the challenges hindering the proper functioning of our music marketplace, and to close the Value Gap in Canada.

Canadian Amazon Prime customers can now enjoy the company’s on-demand music streaming service Prime Music, which launched today in Canada with over one million songs, hundreds of curated playlists, and personalized stations. The ad-free service is now available to Prime customers at no additional cost to their annual membership.

“Music plays such an important role in our customers’ lives, and we’re excited to provide an even better Prime experience for Canada with the launch of Prime Music,” said Mike Strauch, Country Manager for Amazon Canada.

To celebrate their expansion, Amazon Music has created several  “Made In Canada” playlists across genres and eras like Pop, Rock and Alternative, Classic Rock, Singer-Songwriters, and 90s Alternative. 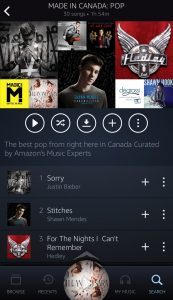 Prime Music can be accessed through the Amazon Music app on iPads, iPhones, Android devices, laptops or online at www.amazon.ca/primemusic. Mobile listeners can also save music for offline playback on their mobile device when they don’t have an internet connection.

In addition to Prime Music, the Amazon Echo is also now available for pre-order in Canada, which will be made available on December 5, 2017. The voice-activated Dolby speaker system will pair with Amazon Music, Spotify, Radioplayer, TuneIn, and more, providing a seamless, hands-free music experience.

Eligible customers who are not already Prime members can try Prime Music with a 30-day free trial.